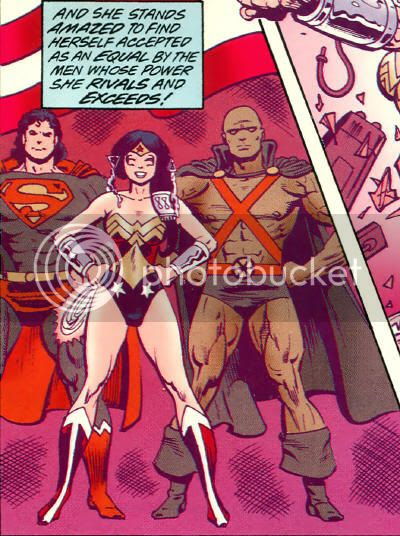 After Crisis on Infinite Earths, DC got really wound up in their newly Marvelized tight ass continuity. It was a major selling point for their entire super-hero line. At the same time, two of their biggest mainstream commercial and critical hits were the tarted up "Imaginary Stories" The Dark Knight Returns and Watchmen. Eventually, DC compromised with the "Elseworlds" banner, where advertising the fact that the stories were way out of continuity was part of the appeal. Considering most of the "Elseworlds" read like overpriced issues of What If...? with far lower body counts and a propensity for milieu adjustments (What if... Batman were a train conductor in the Old West? What if... Batman was a woman in the future? What if... Batman was really Superman, but totally dressed like Batman, who sells way better?) the books were generally well received. Of course, DC couldn't get enough of a good thing, so one year every single annual was an Elseworld, thoroughly diluting the brand and exhausting their audience.

A couple of years later, they tried to pizazz up the old premise with "Legends of the Dead Earth." Instead of doing a steampunk variation of a hero here and a medieval one there, every single annual would be set in a different far future dystopia. That's a really narrow focus to carry twenty-five separate extra length books, and frankly kind of stupid, since about 75% of them involved some sort of legacy bearer taking up the mantle of a super-hero. I realize that no other time period was as important as the 20th century, that no nation matters but the U.S.A., and that every alien world wants to invade the center of all existence, Earth, but please? In a 40th century where things have gotten so bad people are living off their own recycled vomit and feces, some jerk is going to remember temporary '90s hot property Azrael and model their messiah complex after him?

The Martian Manhunter didn't have his own series or the heat of JLA in 1996, but he did get his "Dead Earth" spotlight in Justice League America Annual #10. There were some cameos though, and I've managed to squeeze a lot of words out of one lousy panel. If this were a Superman annual, J'Onn J'Onzz would have died violently, quite possibly at the hands of the Man of Steel himself. Since it's a Wonder Woman one, the Martian Manhunter got a respectful nod. There may have been a backhanded comment involved, but I might just be racially paranoid about green-skinned prejudice.

In this story, some alien chick learned about gender equality and the legend of Wonder Woman through some telepathic projector thingy. One shot featured Superman, the Amazing Amazon, and the Alien Atlas. A funny line pointed out that the chick was, "amazed to find herself accepted as an equal by the men whose power she rivals and exceeds!" To the left was Superman, and Martian Manhunter was on the right, with Princess Diana in the middle.

Obviously there's a lot more to the scenario, which I'll cover next week on my Diana Prince blog, and link from here for ElseWednesday. Martian Manhunter fans don't necessarily need all those details here, right?
Posted by Diabolu Frank at 12:20 AM

The curious combination of Breyfogle over Cockrum will come up. I started that post and ended that post at different levels of exhaustion, so credits fell by the wayside.