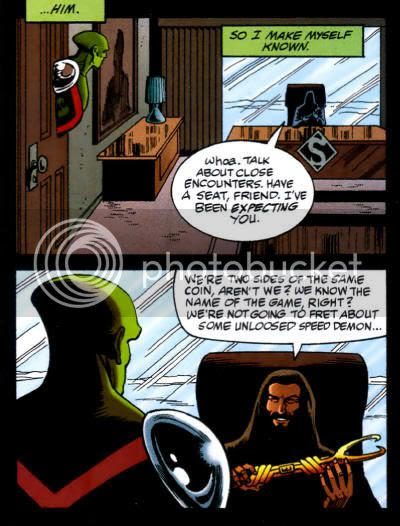 Allen Industries, Central City. The Wally West clone was long gone, leaving quite a mess in his wake. Ralph Dibny was lost in expository thought. Barry and Iris Allen looked on. The Martian was elsewhere, at Immortality, Inc...

"The Earth Manhunter Dibny has been useful, but he has served his purpose. Now I must act alone... I go hunting for Savage. I make myself invisible to the minds of men and drift into his lair. It's an unnecessary exercise. The people are gone. Employees. Scientists. Security staff. There is some finality afoot here. I sense no one. Except... him. So I make myself known."

The Martian passed intangibly into Van Savage's office. "Whoa. Talk about close encounters. Have a seat, friend. I've been expecting you. We're two sides of the same coin, aren't we? We know the name of the game, right? We're not going to fret about some unloosed speed demon..." Meanwhile, the Wally West clone crashed into the home of a young Asian woman named Linda.

Ralph Dibny explained to the Allens that the Martian had "pushed into my mind" a vision of the destruction of Mars, "played out like an IMAX film on the back of my eyeballs. There was this priest, see? Except he was a scientist, too. On Mars, science and religion were the same. No difference. Get my drift? And this nut thought he'd cut the key to heaven. The holy lunatic wasn't satisfied with life on that glorious, thriving world. He yearned for a higher state of being. For himself and the planet." The priest tapped into what the writer avoided referencing explicitly as the Speed Force, which accelerated all terrestrial life into vapor in an instant. "There was one survivor. My green friend... the priest's acolyte. He tried to prevent his master from activating the device. No such luck. A small subspace wormhole... an unexpected anomaly triggered by the... the flashpoint event... opened its cosmic maw and sucked him right in. He found himself dumped on our miserable rockpile. And he's been here ever since. Walking our filthy streets. Living in the shadows. Dreading the day... Well my friends, the day has come. The artifact's come to Earth. Savage has it. The Martian's gone after him. May heaven have mercy on us all."

Barry asked if the Martian was naked, and Ralph confirmed that he was "practically," but couldn't figure what that had to do with anything. My compliments of the design of his costume kind of went out the window as the Martian fell through the wormhole. Kicking his bare feet and with ass jutted, he looked like he was trying to catch tubular waves in his wetsuit like a Silver Surfer, dude!

"From what you've told me..." assured Barry, "... I'm sure your Martian has everything under control." Indeed, Van handed the artifact right over, claiming James Jesse had gone rogue, and "I dealt with him the only way I could." The Martian learned that through his operatives, Savage had been aware of his existence "for decades now... I've formed a pretty good picture of you. Your strengths. Your weaknesses." The Martian felt he had revealed too much over the years, and the immortal Savage agreed that will happen over enough of an expanse of time. The Martian planned to destroy the artifact, "To keep it out of the hands of zealots." Van was as wary of the government as the Martian, and invited him into a secure meeting room. The Martian was well secured within, as Savage watched him immolated from behind a translucent partition. "Not fast enough... Careless careless... No more obstacles now. Just one more soul to talk to..." Van extracted the artifact from the Martian's skeletal remains.

Linda tried to talk Wally out of falling into a trap set by Barry, but the clone raced headlong, and had his powers absorbed. Barry could now tremulously move an atrophied hand. He soon arranged a meeting with Van outside Immortality, Incorporated, a swarm of government agents in tow. It seemed the immortal had lived long enough, but couldn't extinguish his life in so small a manner as suicide. Instead, he would take the human race out with him, through the artifact. Van revealed that it was his experimental bullet that had paralyzed Barry in Dallas as he activated the artifact. Barry had regained his speed through the Wally clone, but wasn't fast enough to stop a sniper's bullet from penetrating Savage's skull, nor the first energy emissions from the artifact. Instead, Allen raced to absorb the lightning with his body, increasing his own speed. Allen took it all in, saving the Earth. In a final vision, he was greeted by fellow Silver Age heroes he had never known in this Elseworld, but all to familiar to the reader. The half-naked Martian Manhunter, Jay Garrick, Superman, a young Iris & Wally West, Green Arrow, Wonder Woman, Batman, Aquaman, Green Lantern, and even the Atom.

Ralph thought he saw Barry leave his wheelchair for an instant, but he must have been consumed by the energy released after Savage's death. He and Iris still held a funeral service. The Wally clone was slowly gaining West's original memories while making time with Linda.

The third of three Flashpoint chapters was by Pat McGreal and Norm Breyfogle. Not a bad set-up, but it seemed like the writer and artist got worked up over a mutual interest in texts on existentialism, metaphysics and so forth. An awful lot got squeezed into this final chapter, and it seemed like the characters and the organic flow of the story got shirt shrift. Still, it was better than average, a whole lot less predictable, and featured uncommon characters (meaning, of course, not Batman or Superman ad nauseum.)

Posted by Diabolu Frank at 1:20 AM

So, once again, a Martian with decades of experience is portrayed as a dupe. Sorry, one would think that J'Onn would have some idea about Savage after observing us for decades. Oh well, I guess that is what a hero gets for being a secondary character in someone else's story.

Will, any time J'Onn manages to not be battered/killed by Superman in an Elseworld, it's a mark in the "win" category. Relative, of course.

I need to cover "Act of God." That's probably one of the least embarrassing Manhunter imaginary stories available.

This really was an epiphany character moment for me. J'onn is trusting and waits to act until he has all the facts. These are things that make him very effective, but are often his undoing. Martian Manhunter: Nice guy, finishes last.