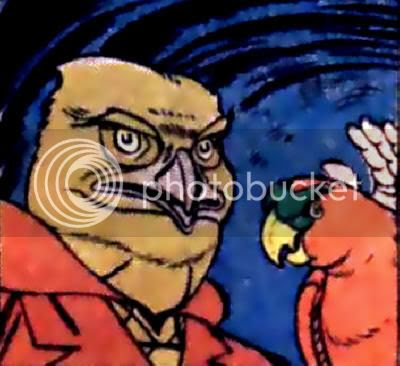 I've been kind of peeved at Google lately. A recent update screwed up my March Madness polls, my scheduled posts keep resetting to unpublished drafts, and even the words I type right now are the result of some coding snafu destroying my first draft of this paragraph. I'm going to go study this weekend, and offer this post recapping holiday shenanigans that never came up on my own Google Reader.

The Irredeemable Shag is usually the ringleader of these April Fool's goofs, and first suggested a 2011 edition in January. His mailing list then promptly forgot all about it, Shag included, or bowed out early. Out of the blue on March 19th, Boosterrific announced that he was going ahead with the plan, and several of us ostriches pulled our heads out of the sand and went, "Oh? Well, okay, I think I'll join you."

The premise this year was to convert your entire blog into something different, devoting it to some obscure property that you have an affection for. Shag of course went the most gloriously nuts by converting Firestorm Fan into B'wana Beast's Blog, dedicated to the curious prevalence of a virtual nonentity for forty years into an enduring cartoon guest star (Justice League Unlimited, Batman: The Brave and the Bold.) Shag created ten entirely new posts, including Why a B’wana Beast Blog?, B’wana Beast in Who’s Who 1985, B’wana Beast gets animated!, Best B’wana Beast Covers of All Time, B’wana Beast Action Figures, POLL: B’wana Beast or Freedom Beast?, B’wana Beast Cosplay at DragonCon 2010*, B’wana Beast Temporary Tattoo, Napoleon Dynamite’s Liger – B’wana Beast’s Greatest Achievement? and my personal favorite, the fan fictional B’wana Beast and Beta Ray Bill – Marvel vs DC Amalgam.
*Caution: May require Kleenex after viewing, regardless of gender

Boosterrific was the one bringing this back, so he sure as heck brought it, with Red Star Fire, the most famous Communist at DC Comics replacing the capitalist running dog Booster Gold. I adore old Soviet bloc propaganda imagery, so the design of the blog alone had me drooling. I don't know how long it will be up at 100%, but it should be accessible through the weekend. If not, the direct link to the permanent content is here.I very much approved of his offering the people a weekly poll to explain what their correct opinion should be, as it was pre-rigged.

Liquidcross briefly lost the reins to the Indigo Tribe blog to Flash rogue Roscoe Dillon, who tried to prove Nobody Tops the Top. That is, until he found himself Dead and loving it.

Always handy as a bulking agent, I converted five of my own blogs, like Diana Prince as the New Wonder Woman into Wundercar Valkyrie!, dedicated to the Nazi aviation from '40s Hillman, '80s Eclipse, and '00s Moonstone comics. That one was mostly pin-ups and pieces from aborted coverage of one of her mini-series.

DC Bloodlines became Marshal Law's San Futuro Police Blog, revolving around synopsizes of the very mature and anti-superhero first six issue mini-series, plus a few extras. It's actually relevant, since DC (of all places) will be reissuing the series.

Power of the Atom was given over to Dreadstar & Company, a childhood favorite creator owned science fantasy series by Jim Starlin. That one was stocked with remembrances, pin-ups, and crudely glued together custom Overpower cards from when I was younger and even more poor.

I had already planned a fan fiction 1995 Manhunter from Mars Annual #12 and some new icons for the sidebar, but The Aviary of the Osprey kind of laid an egg in terms of raw material in replacing The Idol-Head of Diabolu.

I was running on fumes by the time Vibe's Beat Street Blog spun off from Justice League Detroit. That one was cobbled together, like many of the other blogs, from old crap on my ...nurgh... blog from when I did more there than comic book and movie review. Since I already cover Vibe's stories there, that one descended into music videos, pop-lock educationals, and a look back at 1983's D.C. Cab. Apologies for scrapping the bottle of the barrel on that.
Posted by Diabolu Frank at 3:03 PM

Labels: Fanatical Fictions, Martian Manhunter, The Rock of the JLA

Frank - Wonderful recap! I'm hoping to write one myself for Monday, but now maybe I should just plagiarize yours. ;)

Thanks for the shout-out. I love these April Fool's Day crossovers! I thought everyone did a fantastic job!

No apologies for the Vibe entry. I loved it! For you readers, go back and look at all of Franks April 1 posts. Each site features what looks like several different posts, but each site actually has just one really long post with fake breaking points. Brilliantly done!

Looking forward to next year already!

I plagiarized me, so why should I be stingy? I got lazy with the Speed Force links, but the rest of the code should be a simple matter of clean cut and paste. I'm proud to have covered five blogs in that time span, but not a single one matched the delightful zaniness of the B'wana Beast B'log. It was a thing of beauty.