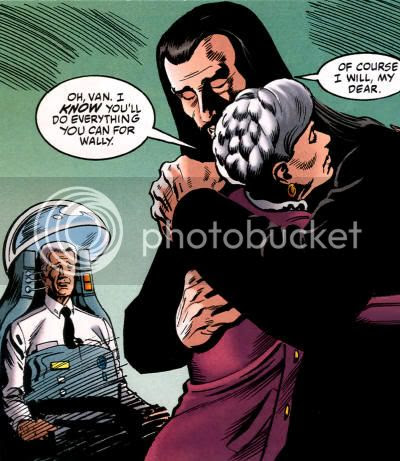 In Elseworlds, heroes are taken from their usual settings and put into strange times and places -- some that have existed or might have existed, and others that can't or shouldn't exist. The result is stories that make characters that are as familiar as yesterday seem as fresh as tomorrow.

Doctor Wally West was part of an astronautical exploratory team investigating a pyramid on Mars in 1999. West uncovered a vibrating artifact which looked an awful lot like an Emmy award, was struck by lightning, and began vibrating uncontrollably. The paraplegic Professor Barry Allen and his wife Iris were on an orbiting space station, and began trying to figure out how to save their nephew.

In 1956, the Flash emerged as the first ever super-hero, battling colorful foes like Captain Boomerang, Nikita Khrushchev, Fidel Castro, and the Vietnam People's Army. As a result, the United States dominated as the one world power, even after the Flash took a "magic bullet" to the neck while saving the life of then-and-current President John F. Kennedy. Allen's identity was revealed to the world, and while his body was crippled, his mind remained faster than light. He married Iris, and his science advanced the whole of civilization.

In a darkened theater recounting these events at the Flash-Space Museum, private detective Ralph Dibny met with a mysterious figure in a trench and fedora. Ralph flicked a lighter to show off some notes, but his client blew it out. There wasn't much to go on, besides what occurred with West. "I don't know who your source is, but I suspect it's near the top. I need more... Was there lightning?" There was, and the figure vanished from Ralph's presence.

Van Savage was a friend and trusted partner to the Allens, so Immortality Incorporated would do everything it could to save Wally West. Van gave Iris a hug, and put one of his top men, Len Snart, on the case. Perhaps cryogenics could help slow West to give them more time? What of the artifact, though? Safely in the orbiter's vault. "We don't dare bring it to Earth."

The first of three Flashpoint chapters was by Pat McGreal and Norm Breyfogle. The writer previously showed his interest in both the tumultuous 1960s and John Jones in the short story "Heat Wave". Editor Paul Kupperberg first proposed to him the prospect of writing a Flash Elseworlds, while McGreal suggested Breyfogle for the project. It was the first, and one of the only, Elseworlds published in a standard mini-series format.

I am more jazzed for your coverage than the new unrelated event.

Grodd of War and BatManhunter gave me pause, but I'm happy to say that I'm ordering nothing Flashpoint related this month. Bleh.