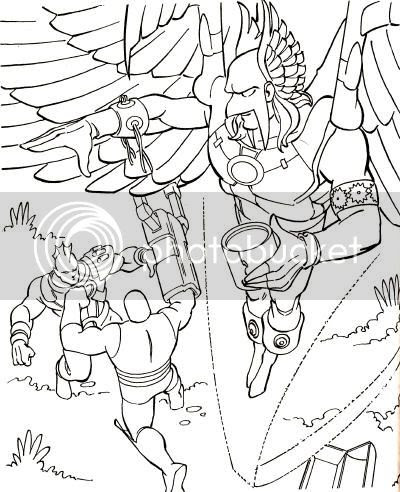 While Darkseid fought for the treasure he'd had Despero dig up with his "Capture-Claw," Hawkman combined nth metal and fractal armor to snatch the component of the ultimate weapon.

I had great affection for my Super Powers Collection Darkside with the light up Omega Effect eyes, but that claw kept me from buying the Total Justice version. Unlike the other questionable accessories packaged with figures from the line, the claw was a non-removable portion of the sculpt. Even still, it wasn't too hot of a model anyway.
Posted by Diabolu Frank at 12:00 AM

It looks more like Hawkman is sneaking away with a cup of coffee in his hand than a component of the ultimate weapon.

P.S. Frank, have you seen this?

Thanks Liss. I've got a backlog of Manhunter-related links to work through in January, and that's on my list. For now though, Despero is saving my butt.