The Vile Menagerie: THE LIZARD MEN 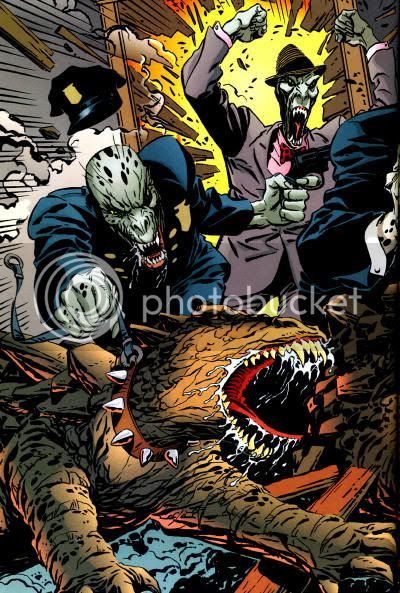 History:
The Lizard Men are a space-faring reptilian race of shapeshifting would-be conquerors. They eventually landed on the planet Mars at some point after its indigenous species was wiped out by a plague. A sole survivor, the Master Gardener of Mars, used his own shape-shifting and additional powers to convince the Lizard Men that he was their long last "Father-God." The Gardener then enslaved the Lizard Men through parasitic horticulture, and employed them in a secret invasion of the neighboring world Earth.

Beginning during World War II, the Lizard Men infiltrated human society on a global scale while infecting human bodies with the same sort of horticulture introduced into their species. From a central location in Puerto Iberez, Cuba, the Lizard Men conquered the human race throughout the 1950s, stealthily quashing any potential resistance from super-heroes by corrupting them bodily. The masses were blissfully unaware of any of this, while heroes and artists struggled to subvert the Lizard Men without crossing lines that would trigger their bodies to spontaneously combust. It wasn't until the end of the decade that their plot began to unravel, after attracting the attention of the Manhunter from Mars.

The Lizard Men maintained control of the stronger willed by inserting themselves into all manner of government, police and media. When lawyer and game show contestant Bonnie Joy refused to follow orders, her head exploded and she was replaced by a lizard duplicate. Plainclothes detective Jim Swift and a detail of uniformed lizard officers attempted to arrest J'Onn J'Onzz in New York. Slimy F.B.I. agent Anole managed to corner J'Onzz in Las Vegas with the help of television personality Whitey Bright and the forcibly retired super-hero Dr. Mid-Nite. 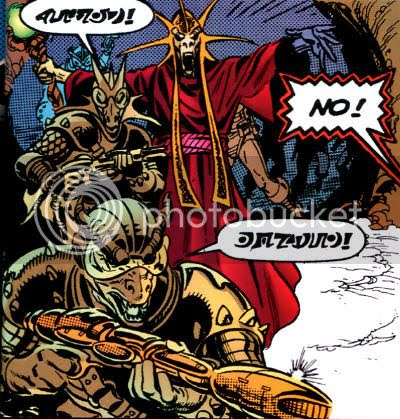 Despite their efforts, the Martian Manhunter eventually located the Lizard Men's base in Cuba, and uncovered the true nature of their leader. Unaware that their master was a Martian, the "Father-God" was unintentionally felled by lizard flame-throwers while they were attempting to target J'Onn J'Onzz. The Martian Manhunter tricked the Lizard Men into destroying their own horticulture operation, and later tracked down the various rudderless invaders for deportation.

Powers & Weapons:
Through unknown means, the Lizard Men are able to disguise their true nature and appear as humans to most people. However, their disguise is not foolproof, and they can be recognized as different by exceptionally perceptive beings. They possess super-human strength, durability, and an invulnerability to fire. They have displayed the ability to detect the presence of an invisible Martian.

The Lizard Men utilized advanced flame throwers against the Martian Manhunter, and possessed other technology beyond Earth science during their time controlling the planet. Many of their warriors wore body armor. They often employed incredibly strong saurian "lizard-dogs," that could "see inside," likely referring to some primal instinct that allowed them to detect people unaffected by the fungus.

Distinguishing Features:
Individual Lizard Men had varied features and skin colors, but were united by the appearance of spots and stripes on their flesh; a basic consistency of form; claws, fangs, broad mouths; as well as a general lack of hair.

Created by Gerard Jones & Eduardo Barreto
Posted by Diabolu Frank at 12:00 AM

American Secrets was such a great series. I bought all 3 of them on ebay two years ago for under 5 bucks.

Frank, thanks for a great entry. This was very interesting. (I would love it if American Secrets was somehow kept in the new continuity -- with perhaps a member of Stormwatch replacing Dr. Mid-Nite.)

I had a theory about that I may relate next year, Will...