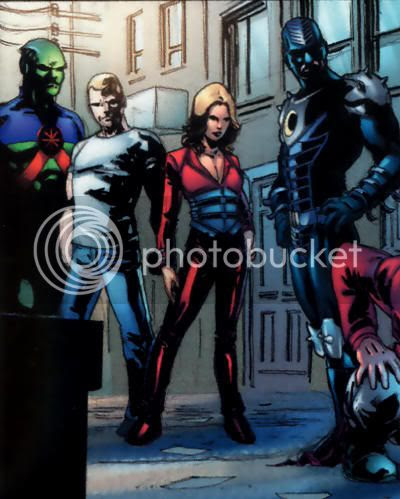 Moscow. The media was screaming with reports of dozens of meteors headed toward Earth, causing the Projectionist pain. One had already struck in an isolated section of Colorado, which curiously attracted the attention of Jack Hawksmoor. The Martian (as Adam One referred to him) checked in on why Jack sat Indian style and checked out. "I can telepathically hear him, talking to three cities." Sure enough, anthropomorphized representations of Paris (glamorous blond,) Metropolis (basically Byrne-era Lois Lane,) and Gotham (a bat-like gargoyle) discussed how an "ancient... lost city... the greatest" had once been located in, per Jack, "Nowhere, Colorado." Gotham suggested that the city once exceeded its own madness, which Jack could potentially tap against the meteor monster. Gee, a great city madder than Gotham located in Colorado that on Earth-Prime is merely a ghost town. Curious. Of course, I'll have a great many curse words to utter if the fanfic term Apex City actually rears its head.

Adam One had Manhunter telepathically transmit the locations of the meteors into Apollo's brain from out of the Projectionist's, since all his Oliver Queeniness about helping the little guy wouldn't mean much if a giant tentacle monster ate them all. This was represented by a light show to make the Disco Dazzler envious. Apollo then flew up into space, where he could absorb even more unfiltered solar energy to power up for punching meteors. He maintained contact with Stormwatch by emitting radio waves on their "comms implants" frequency, which is exactly the sort of contrivance that makes a telepathic Martian teammate of dubious worth. Speaking to himself as "Andrew," Apollo pushed beyond previous limits to force the meteors to burn up in the sun for all the ingrates below who would surely hate him if they knew he existed. The final rock was a monolithic "planet-killer," which shattered to pieces on impact from Apollo and sent him barreling back to Earth. 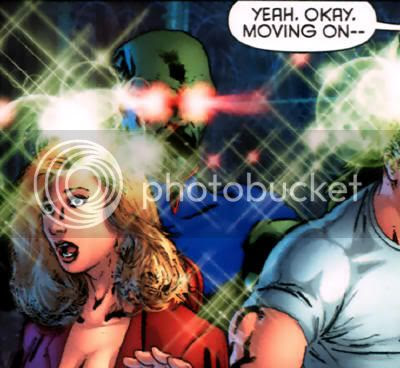 On the moon, Harry Tanner gloated over tricking the Scourge of Worlds, absorbing all of its data into his brain despite resistance. The Eminence of Blades then hacked at the eye of the Scourge, presumably killing it. The Engineer located Harry as the "environment bubble" began collapsing in the Scourge's absence, and the pair shared a kiss. Jenny Quantum pulled a "no time for love" on them, so the lot made an exit while Harry grinned nefariously.

At the Eye of the Storm base in Hyperspace, Stormwatch plotted strategy against the Colorado monster. Manhunter was "telepathically making humans depart the vicinity," while Projectionist continued to manipulate the Justice League away from "blundering" onto the scene. I'm sure the imperiled locals appreciated the willful misdirection of potential help from the control freaks of the sky. The Engineer took another cheap shot at Adam One, while he proceeded to earn it by delivering Stormwatch without a definite plan to the crash site through a teleportational door. A horrified Martian exclaimed, "By all the Gods--!" Harry explained that the Scourge was planning to use enormous monsters like the one present to ready Earth for worse to come. While Jack tried to make contact with the lost city, Adam One ordered everyone else to protect him in the meantime, with fliers Manhunter and Engineer taking point. Only the Projectionist remained at HQ, to erase all media traces of the monster, "Even if it kills me." 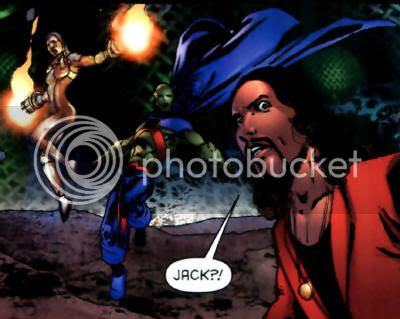 While Jenny explained her powers to the tag-along Midnighter, the Engineer bitched about Adam not having a back-up plan, just as the primary one fell apart. The city violently rejected Jack's contact, while Midnighter tried to get everyone to retreat a.s.a.p. "Listen to me. I know how to kill anything. So I know. This isn't going to work. Nothing is going to work." As the monster broke through Stormwatch's defenses, Adam One froze as leader, earning Midnighter's scorn. "Are you listening to me?! What sort of leader are you... I'm saying you can't hold out at this range! It's absorbing everything you throw at it!" Unheeded, Midnighter watched the rest of the team get absorbed into the monster, "--leaving me to fight you all." That thing about dismissing the JLA as inept? Pot-- kettle.

"The Dark Side: Part Three" was by Paul Cornell and Miguel Sepulveda. My lengthy comments and criticisms are here.

Well, it seems that Stormwatch here continued to be the Midnighter and Apollo show -- even if there were a few small good things about J'Onn. In light of Cornell's departure from Stormwatch, I feel that my hopes for the series are up in the air.

My hope is that the series will get a good writer who can do a lot with the characters. J'Onn is not being used to his full potential. Nor are many of the other characters. Stormwatch as a group comes across as more than a little arrogant, claiming to be professionals when they seem to be as dysfunctional as some families on a bad comedy or a soap opera.

Cornell is apparently no good at team books, and not very good at common sense.