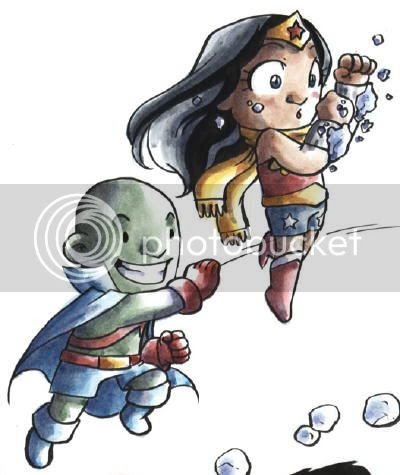 Happy Hanukkah everybody! Actually, I misread my calender, and thought it began at nightfall on the 21st instead of the 20th. It already got a really late start this year, close to that pagan holiday Yuletide everyone seems to go crazy over. Consider this an Advent-y post also, since you'll have to click on the picture to open the entire adorable scene!

Aww, that is so cute. It's too bad J'onn is wearing red gloves, though.

Speaking of cuteness, I heard Tiny Titans has been cancelled!

I'll take the red gloves. J'Onn already has the design problem of blue cape on blue costume, so he needs the red to punch it up. I VASTLY prefer that color compliment to the gold others (weirdly) go with (especially bracelets while flying beside Wonder Woman.)

Shame about Tiny Titans. It wasn't to my taste, but it was the kind of book I'm glad existed for both more general and more niche audiences. I think the creative team is doing some of those Super-Pets books now to better reach out.

Yeah I was bummed about Tiny Titans myself. Its one of he looks we order for the Juvinile Graphic Novel section at the library, and the kids love it. Its getting harder and harder to find really kid friendly superhero books.....

Jillikers! It's been a long time since we got a Sarah The Anime Librarian comment...

Hi Frank! LOL I got off the blogger thing for a very very long time. Good to be back. Looking forward to reading regularly again! :)

Great to have you back!