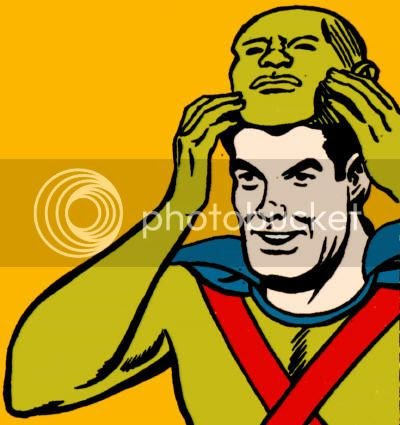 History:
Dirk Giles may have lived on the swank side of town with a large personal fortune, but that didn't earn him the heart of his best girl Hazel, who saw him as a useless coward. Knowing Hazel was a great admirer of the Martian Manhunter, Giles create a suit in his likeness to impersonate the hero. Giles then set up a series of phony "feats" to perform, so that he could claim to be the hero. The scam attracted the attention of the true Manhunter from Mars, as well as the Buggsy Baines Gang, who were looking to test a rumor that the Alien Atlas was vulnerable to fire. J'onn J'onzz confronted Giles, then used him to convince the gangsters that they were wrong about their theory while aiding the playboy through secret Martian interventions. Hazel was impressed by Giles' daring, but made him swear never to risk his life in that way again.

Powers & Weapons:
Dirk Giles employed a variety of gimmicks to convince people that he was the Martian Manhunter, including a midget dirigible disguised as a runaway truck, and a fake flaming meteorite made of brittle plastic.

thanks for your work on this character profile. much appreciated.hope you get around to all of the mm characters eventually.

I'm working on it, harder now than ever. The one-offs are pretty easy, but I'll confess that guys like Captain Harding and his 70+ appearances are years away from getting profiles.

Just curious, how did you come up with that full name? It appears that you nailed my name exactly, so my imagination is spiked.