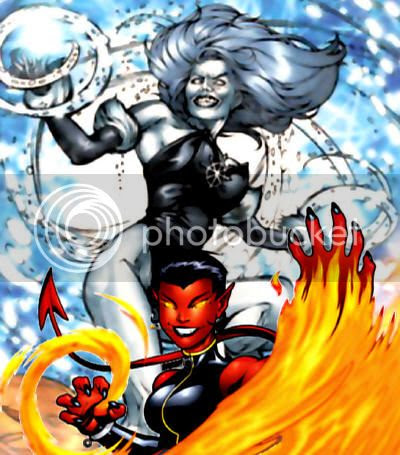 Aubrey Sparks was a redneck transformed by Emperor Joker into a hard living devil girl. Her mental instability caused her to clash with various heroes until she struck up a bargain with J'Onn J'Onzz to fix her mind if she fixed his weakness against fire. Both were temporarily successful, until the ancient Martian id monster Fernus cooked her brain.

Scientist Louise Lincoln inherited the role and powers of Killer Frost from her deceased friend and colleague Crystal Frost, with whom she had the common bond of being murderous nutters. Frost has plagued many heroes of the DC Universe, but holds special enmity against the Nuclear Man.

Idol Speculation:
Elemental confrontations are visual spectacles, but I burned Scorch with this match. Killer Frost's powers are fueled by heat, and since that's about the only weapon in Scorch's arsenal, Frost will simply gorge and chill.
Posted by Diabolu Frank at 12:00 AM

Killer Frost would take this one, although Scorch has more of a history with J'Onn. Add in the fact that Killer Frost is also a scientist who can prepare a few nasty tricks for Scorch, she triumphs.

Mind you, I have more sympathy for Scorch as she was someone altered by Emperor Joker -- which would not be a pleasant experience.

I can't pick because I love them both so much!

Killer Frost hands down. And my comment is based upon Killer Frost's heat absorption, rather than my own personal bias. After all, I think Scorch is pretty hot too! (see what I did there?)

Anj, part of the reason why I was cool with this is because I like Killer Frost better than Scorch, and even when the Manhunter villains lose, at least it's to a higher caliber of villain.

Shag, this one was pretty much a no-brainer, but thankfully I have any number of Firestorm rogues to throw under the Vile Menagerie's touring bus as we go further down the more dire stretches of road. I think the Human Squirrel could take the Weasel, at least with a home turf advantage!