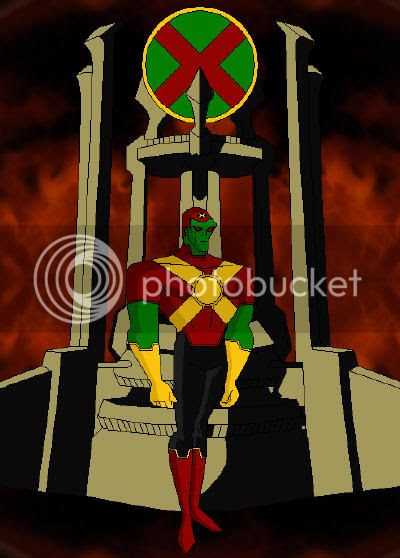 N:TAS DCU: Z'Onn Z'Orr: Roh' Kar 7-14-11
At the Super Buddies message board, there's a user under the handle "NightwingTAS" who builds digital figure models off the Bruce Timm DC Animated Series template for further fan fiction adventures of his own devising. Number 9 in the "Z'Onn "Z'Orr" series, here's his take on Roh Kar, First Lawman of Mars...

Roh' Kar was a Martian Lawman, who came to Earth 10 years before J'Onn, the Martian Manhunter had. Roh' Kar was sent to Earth to capture an escape criminal. During his mission Roh' Kar discovered that he liked Earth, so once he returned the criminal to Mars Roh' Kar returned to Earth and led a life of globetrotting, along his travels he met a young Bruce Wayne, who was still training to become Batman. Roh' Kar came out of hiding when he heard the mental cry from the Martians being held.

The name variation and "mental cry" would be related to the events in Martian Manhunter #1 (October, 2006). It's funny seeing the guy so beefy.

Also today: Captain Atom's Family @ Power of the Atom
Posted by Diabolu Frank at 12:00 AM

It is strange seeing Roh'Kar but I think that it would be good if other, sane, compassionate Martians could show up in the new continuity. In some ways, J'Onn is one of the loneliest characters in comics.

Agreed. Superman is supposed to be the Last Son of Krypton, but his popularity necessitates spin-offs and their popularity sustains them. Meanwhile, about the only competition for a Kryptonian super-hero are a bunch of Kryptonian villains, which continues to diminish the uniqueness of a character that is singular in conception.

Martian Manhunter as a sole survivor is easier to maintain because DC doesn't really need other Martians, but that role is inessential to the character of J'onn J'onzz. For thirteen years, J'onzz functioned as a member of a thriving race which provided him with occasional adversity. Since them, the Alien Atlas has been defined by loss and failure, whether it's against his Martian foes, the decline of his culture, or the deaths of friends and family. He has for long periods of time been the last of his kind, but conceptually he is allowed to be part of a living race, and what sets him apart isn't his comparative greatness amongst them, but his life choices and circumstances. It seems to me that Miss Martian has eclipsed the Manhunter from Mars in popularity, and that's okay, because he's allowed by design to exist outside of the spotlight. He can have positive countrymen without weighing down the core of the character.