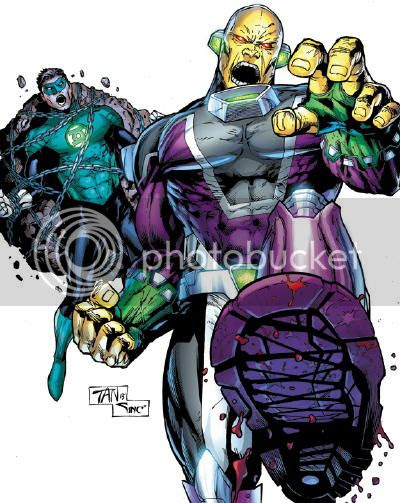 Deep in space, an unstoppable force is committing genocide on a galaxy-wide scale, and only the strongest will survive! Be warned, because nothing can prepare you for an all-new Warworld under the absolute rule of the tyrant called Mongul!

Every time I start to think I could quit DC, they do something like this. Jim Starlin is one of my all time favorite writer/artists, and while I haven't truly enjoyed his scripts in a long while, there will always be love there. Starlin co-created Mongul for DC Comics Presents #27 (November, 1980), a team-up between Superman and the long dormant Martian Manhunter. Starlin continued contributing to Mongul's adventures as the Man of Steel was joined by Supergirl, The Spectre and Starman in dealing with Mongul's machinations. Other creators took to Mongul, most memorably Alan Moore, but the character drifted far from his original conception after the Crisis on Infinite Earths. In recent years, creators seemed to take all their cues from the unimaginative Post-Crisis incarnation of the character, or just mine Moore's one story over and over again.

Jim Starlin made Mongul a villainous player with a great deal of potential, which was likely why Alan Moore used the character in the first place, only to see Mongul devolve into a brutal thug. Starlin hasn't written the character in any significant way since 1981, though I obviously and some thoughts about how that could have gone down. J'Onn J'Onzz was the first super-hero to ever face Mongul, and it would be really sweet if he could get himself snuck into this special. Regardless, even with the Green Lantern connection, the inclusion of Warworld and visual cues in his revised costume strongly point to a return to Mongul's early days. Maybe we'll finally get the full story on The Arkymandryte? I don't even mind that the artist who killed Mongul in Underworld Unleashed is on board, since he drew the guy quite well before Neron snapped his neck. This book seems all about second chances to get things right, and until Justice League of America #7.2: Commander Blanx gets announced, this is my #1 pick of the event!
Posted by Diabolu Frank at 12:00 AM

I am still sifting through all the solicits. I usually wait until they are all in one place to read.

But this sounds good. Starlin and Mongul ... together again for the first time!

I don't know how I feel about this 'event' yet. It is great to see some interesting creator names on books (Sterling Gates, Charles Soule, Starlin). But there are titles being skipped over, including many I collect. And that sucks.