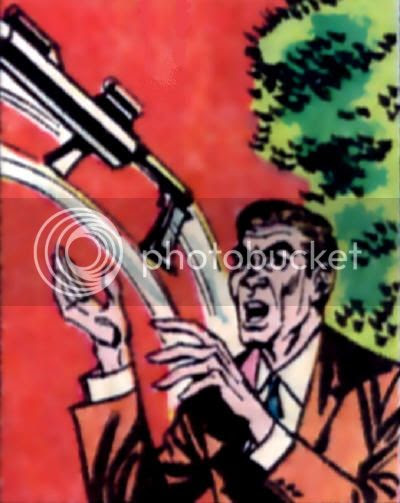 The captive-ray gun was a powerful weapon developed by the scientists of the world-wide criminal syndicate Vulture. According to their leader Mr.V, "It is... capable of overcoming any force on Earth! It's basic component is a microscopic element so rare, it has taken 15 years to extract and refine it for use!" After thousands of tests, the weapon proved capable of projecting an imprisoning sphere around a target of such resilience that even the Martian Manhunter could not break out of it. Mr.V made the gun available to Vulture's members, and it was field tested against the Alien Atlas by Cluzot, but failed to win the day due to human error. J'onn J'onzz destroyed Cluzot's captive-ray gun, but it is uncertain whether it was the only working model.