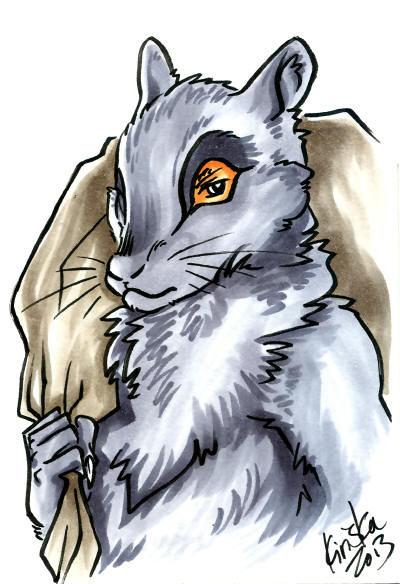 It's finally time to start the 2013 commissions! Yay! And we'll start with 余依笛! What, you don't read Chinese? Okay, we'll start with Yidi Yu! Yeah, I don't know who that is, either. Oh wait, it's the artist known more commonly as Kiriska? Of 2012's Human Squirrel figural sketch and Human Falcon bust? Say, we like her!

I still want to get a full color full figure from her someday, but until I get my crap together and set up a commission by mail, it doesn't seem likely to happen. Kiriska read the posts linked above, and I pitched her on the idea again, but yeah, we ended up with another 4" x 6" head shot instead. Maybe I'll just have her do individual body parts until I build the commission into a figure. It would help if I'd gotten three of Kiriska's classy and inexpensive pieces like I'd intended, but Comicpalooza 2013 was frankly a hassle for me, and I didn't have the oomph to pursue it like I should have. It's a shame, since Kiriska turned in a fine piece on the very first day.

Ben Stoves is pretty smug looking for a guy in a Squirrel costume, huh? I wonder how he'd fare against that guy I saw cosplaying as Frank from Donnie Darko? I like the exposed eyebrow, recalling how Jim Lee and Rik Levins used to do Captain America in the '90s. The suit may be cute, but mind that claw, kid. The colors work great here, and Kiriska even started putting her pieces in a little resealable bag with a custom cut backing board. Nifty!

For more, visit Kiriska.com, the tumblr A Question of Intent, &/or her deviantART gallery!

Nice! The exposed eyebrow is great--adds some character to it. I love the coloring, too.