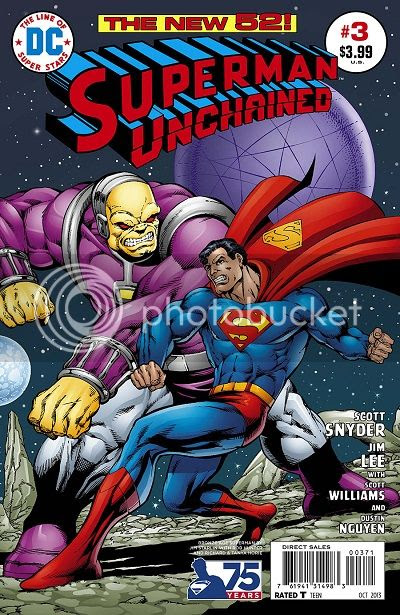 Jim Starlin co-created Mongul in 1980 with Len Wein for a story teaming-up Superman and the Manhunter from Mars. That story was wiped out Post-Crisis, and creators totally lost the plot with Mongul, throwing out his basic personality, backstory and method of operations to offer a jaundiced thug in their place. That Mongul was executed by Neron and replaced by two children who were even less agreeable than their dad. In 2013, Starlin wrote Mongul's "Villains Month" special issue, and had the opportunity of the New 52 to restore the unique elements lost to Mongul since the Bronze Age. Instead, Starlin towed the party line, regurgitating bullet points from Mongul's Pre-Flashpoint career, and tramping the dirt down on ever seeing the original Mongul again. Just to salt that earth, Starlin produced this cover as part of the 75th Anniversary celebration of Superman, which features Mongul's initial design, but no sign of J'onn J'onzz. “Bronze Age Superman” is credited to Starlin, Rob Hunter, and Richard & Tanya Horie.
Posted by Diabolu Frank at 12:00 AM