That Glowing Menace vs. Chemo 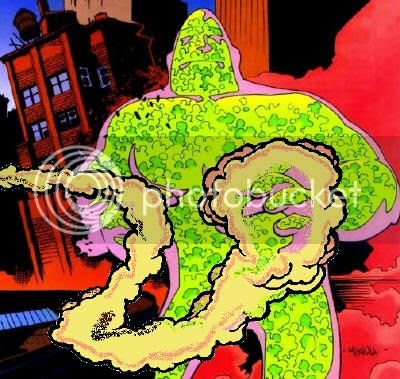 Bio:
First emission of the Diabolu Idol-Head. "Eats" everything in its path until full, including whole fleets of commercial jets. "Killed" Detective John Jones. Only destroyed by specific undefined form of energy blast.

Bio: A dumping container for chemicals gained mild sentience and epic malevolence. Killed Tula and destroyed the city of Blüdhaven.

Idol Speculation:
Chemo has appeared an awful lot for a giant Silver Age goofus, and has a serious body count besides. However, he's also one of those threats whose defeat usually revolves around some form of deconstruction, and he's appeared enough times to have been torn up plentifully. The Glowing Menace took everything Martian Manhunter threw at him, literally, and only vanished after being exposed to eyebeams from a possessed individual seemingly created specifically to counter the menace. There's no clear reason why the Glowing Menace couldn't eat Chemo in one gulp and maybe offer an acid belch afterward.

Posted by Diabolu Frank at 1:03 AM

I went with That Glowing Menace. It is a much more iconic creature, looks harder to destroy, and actually had a significant impact on a character.