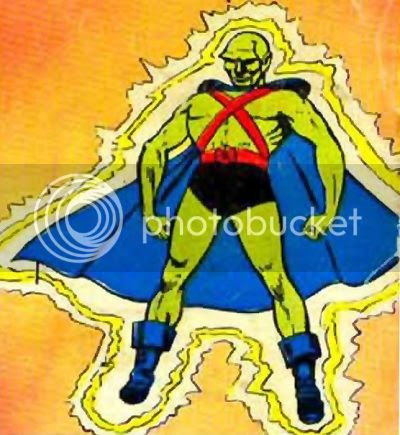 Above is a cover detail from the 1961 giant-sized reprint special Secret Origins. The Martian Manhunter's first story was represented here, and this image was taken from that 1955 tale. While not the character's first cover appearance, it was among his earliest, and this was a rare moment of individual spotlight. Personally, I consider this an iconic image of the character, but you mileage may vary. Despite appearing in over 2,000 comic books, less than sixty have had Martian Manhunter in their title, and all of those were released after the character was already over thirty years old. Depending on when you started reading the character, the most indelible images of the Alien Atlas in your memory may be from interior splash pages of his solo strip, guest appearances, key moments in team books, a frame from a cartoon or maybe a piece of merchandising. Carrying a lot of these types of images in your head comes with writing a themed blog for nearly seven years, but I'd like to hear from a broader sampling than me, myself and I. Offer a reference, a link, a jpeg, a description-- whatever works! I can't read your mind, but I'd like to hear your thoughts...
Posted by Diabolu Frank at 5:52 AM

Three for me off the top of my head.

1) Crashing into the JLA satellite to confront Firestorm in JLA #200. Great art by Pat Broderick.

2) A flaking battered J'Onn telling Asmodel he won't pass in Morrison's JLA. Yes Superman wrestles the Angel. But J'Onn held him back.

3) Smiling at Jon Stewart in Cosmic Odyssey when he 'convinces' GL not to off himself. Mike Mignola art.

Can look for pics but bet you have them already.

The first three that come to mind...

1. The cover to NEW FRONTIER #4. I always thought Darwyn Cooke's take on J'Onn felt the most authentic, but maybe that has to do with the period nature of the story.
http://goodcomics.comicbookresources.com/wp-content/uploads/2011/11/martianmanhunter5.jpg

2. Not sure where this image originated or the artist but I saw it years ago and it stuck with me.
http://www.monitorduty.com/imgs/oldimages/Martian%20Manhunter%20Painting.jpg

3. J'Onn painted by Alex Ross from the backup "files" from JUSTICE.
http://24.media.tumblr.com/tumblr_lbwapvsudl1qdep0so1_500.jpg

1) I know the one, and it's a humdinger. I ended up with three pieces by Broderick coming out of Comicpalooza, but will probably sit on two of them until 2015. The third features a character from this period.

2) "Stand down, soldier." When Wizard was all over Superman's angel wrestling, I was all "but what about the guy who held the line?"

3) That grin spoke volumes. I think Christopher Priest's characterization of J'Onn in Justice League Task Force revolved around that grin.

1) Cooke was the one guy who managed to synthesize the best of previous period Manhunter stories into one narrative showcase. It made for an excellent retrospective for exposing new readers to the character.

2) That would be the 1998 DC Direct Martian Manhunter Poster by Christopher Moeller. Interesting story behind that. The art was commissioned as the cover to a two part Legends of the DC Universe story by Ron Marz and Bryan Hitch, but that's as far as the proposal got, so they turned the art into a poster, instead. Moeller had painted two covers, and you can see #1 here.

3) I've been critical of Alex Ross at times, but he's been disproportionately kind to J'Onn J'Onzz. I've got that image on a t-shirt, but didn't wear it promptly, then fattened up into that being unlikely anytime in the foreseeable future.

Oh man, that other unused Moeller painting is fantastic! Just based on those covers and the talent involved, that would have made an awesome story for Legends of the DCU.

Many good moments here. Here is a great statue of J'Onn amid the ruins of Mars, looking determined.

Also, I think that there are many good images of J'Onn in Liberty and Justice. I particularly like the scene where he talks to the UN.

Many good moments here. Here is a great statue of J'Onn amid the ruins of Mars, looking determined.

Also, I think that there are many good images of J'Onn in Liberty and Justice. I particularly like the scene where he talks to the UN.

1. My personal favorite is the car-lifting splash page from American Secrets. Not only is the art spectacular, but it comes from a key moment in the story. This is the one I'm referring to. I couldn't even find it on a Google Image search, so I guess it's not as well-known as I'd like it to be.

2. The cover to JLI/Justice League America #39. Because I find it absolutely terrifying. (All the more so by the cognitive dissonance of having a happy Booster and Beetle up there under the price.) Also, I like covers that have speech bubbles on them--I wish that happened more today. Plus I like how Hughes draws J'onn--powerful, but not in a ridiculous body-builder kind of way.

3. I agree with Count about DC: The New Frontier. I have a soft spot in my heart for it because it was one of my first introductions to J'onn and the DC universe as a whole. The scenes that stand out to me are: J'onn watching TV and imitating various characters, J'onn playing chess with King Faraday, and the scene where his eyes turn red after someone mentions the Mars rocket. The splash page where we first see J'onn in his natural form is pretty nice--I like Cooke's interpretation of the natural Martian--kind of weathered-looking and ancient.

4. I'm trying to think of something from the JLU cartoon, but I can't think of anything specific other than a scene in the first season where J'onn goes intangible through a robot's chest and rips its "heart" out. They did good work putting his intangibility to good (fighting) use on that show, from a visual standpoint. Also, J'onn himself gets ripped in half in a later season and melds his two halves together. It's kind of disturbing, but it shows how hard he is to kill. I wasn't too keen on his character design for that show, but his fighting style made up for it. Oh, and he never took the elevator on the JL satellite, he just went down through the floor. Which makes perfect sense.

Will, that statue was based on Alex Ross art, so that guy continues to be well represented.

1) That image was used in the first Wizard Magazine JLA special under J'Onn's entry, so you're not entirely alone in appreciating it.

2) I think that was one of CBR/CSBG's top Martian Manhunter covers. I liked the way Hughes drew J'Onn's poofy cape and boots, plus the dark alien eyes.

4) I always had reservations about J'Onn's usage on the cartoon, but left a positive impression on a very broad audience. The Manhunter stole a lot of his latter day personality and the variable density shtick from The Vision, so we've got that to look forward to in a Marvel movie.

Will - I also really loved the scene where J'Onn addresses UN in "Liberty and Justice".

Frank - I would add one more that we talked about yesterday on Twitter: the cover to JUSTICE LEAGUE OF AMERICA #230 with J'Onn fighting the Marshal, as well as the fight sequence inside the book and J'Onn's scene with J'En earlier in the issue. This three-parter is one of my favorite stories from JLA and I like this Martian Manhunter vs. conquering Martians story better than any Superman vs. Zod/evil Kryptonians story I've ever seen in comics or film.

Am I wrong or did you and the fellas record an episode of the Fire & Water Podcast about these issues?

I believe the episode in question was #14. I listened to it recently, and it hurt a bit. I got in on the podcast early, and the boys realized that they needed to space that smack out more. We all figured #50 had killed the podcast. Maybe I'll finally bring it down on the next try?

Oh, yeah, Hughes's dark eyes were equal parts unsettling and cool. I'm on the fence as to whether I like that more than the red eyes.

The Timm designs of the JLU cartoon really don't stand the test of time, in my opinion, especially J'onn. I really disliked the way he was drawn, but, oh, well, beggars can't be choosers, I guess.

Red eyes are common. Dark blue/black on a green-skinned alien is not.