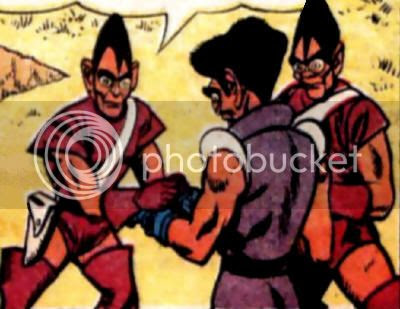 History:
When a Saturnian Criminal escaped custody and fled to Earth, peace officers from his planet gave chase. Two Saturnian Lawmen tracked their prey to Middletown, U.S.A., where they contacted local authorities for assistance. As it happened, the criminal had attempted to murder Detective John Jones, then stole his identification and shape-shifted into his form. The false John Jones was located by Patrolwoman Diane Meade and taken to headquarters, where Captain Harding "introduced" him to the lawmen, who were unaware of the charade. The false Detective Jones was asked to take the lead on the manhunt for the Saturnian criminal, but instead set a trap for the lawmen in the Pascack area. The Lawmen, believing they were being guided to a hideout, instead fell into a concealed pit filled with oil from a ruptured underground pipeline. Incapacitated and facing gradual death, the Saturnian Lawmen lay trapped in the pit, waiting for Middletown police and the heroic Manhunter from Mars to subdue the criminal and rescue them. The Lawmen thanked the Manhunter profusely, then blasted off in their alien ship with prisoner in tow.

Powers & Weapons:
It is unknown if the Saturnian Lawmen possessed any superhuman powers of the sort displayed by the criminal they pursued or other representatives of Saturn, though the criminal alluded to their having some. They appeared to carry some form of handgun, but they never left their holster. The Lawmen carried bracelets impregnated with oil to wrap around the wrists of Saturnian prisoners to keep them docile.

Weaknesses:
A singular weakness "of all Saturnians" is oil, which causes them to lose their powers if exposed to even a tiny amount, and will cause them to perish under extended contact.

Quote: "The Earth Detective is beckoning to us to follow-- that must be where the hideout is!"

Created by Jack Miller & Joe Certa
Posted by Diabolu Frank at 1:37 AM