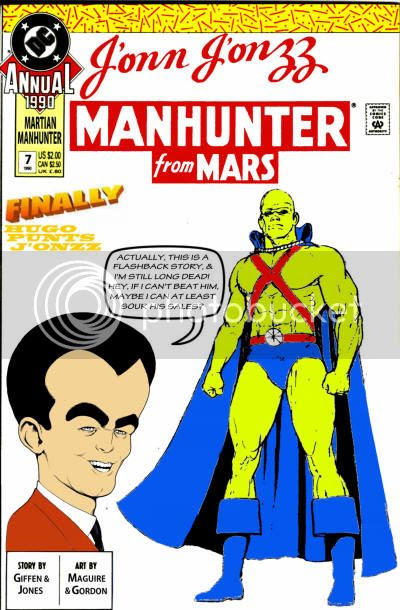 At Comicpalooza 2013, I asked Kevin Maguire if this figure sketch I got off eBay cheap in the late '90s was legit, but he kind of shrugged it off with something like "it looks like my stuff." I thought about asking him to ink it, so that it could for sure be his, but he wasn't interested in doing any figure drawing, and I didn't want to be a nudge. Whether it was him or not, I like the piece, and have been wanting to incorporate it into one of my little fan fiction "covers" for a while now.

I never even spoke to Josef Rubinstein at the con, just because of circumstances, but I definitely regret not having him ink the piece (as he'd embellished Maguire on his late '80s JLI run.) Mostly because the paper has faded so badly, and even my old contrasted Xeroxes of the art didn't take well to scanning. Still, today is the seventh anniversary of the blog, and I wanted to do something a bit spiffier than the deviantArt ports I've been doing since mid-July. I remained pressed for time though, so I decided to use the weathered and raw "Maguire" piece regardless of the low quality of scan/coloring and just do the dang thing already.

Since I was already hacking out the key piece of art, that "whatever" aesthetic extended to the lettering (a rough jpeg of "Finally," obvious bad MS Paint fonts,) poorly laid out old J'Onn J'Onzz logo, no background, etc. I scanned my copy of Justice League Antarctica Annual #4 because it was mostly white and had an "awesome" '80s header graphic (where I could have done something neat with the Martian Manhunter "pie" symbol, as seen on the Hawkworld and Batman Annuals.) No time for quality. Just git 'er done.

So, forgive the crudeness, but it's still kind of cute, got a favorite in there with Professor Arnold Hugo, and it acknowledges the anniversary. The "1997" Annual will post next week, and both feature sneak peek bowdlerized portions of art I had commissioned this year that I haven't offered true spotlight posts for yet.
Posted by Diabolu Frank at 12:00 AM

Hey, it looks nice colored! Though I wish you could've gotten a definite answer from Maguire, but he's probably done so many sketches. The old J'onn J'onzz logo goes great with Hugo, too.

If you ever need a hi-res scan for whatever reason, you can scan pieces of the original and I can stitch it together for you in Photoshop, and I can get rid of the fading.

When I looked to Hector Hammond, I tend to be glad the only people who ever bothered to revisit Hugo were DC Super Friends.