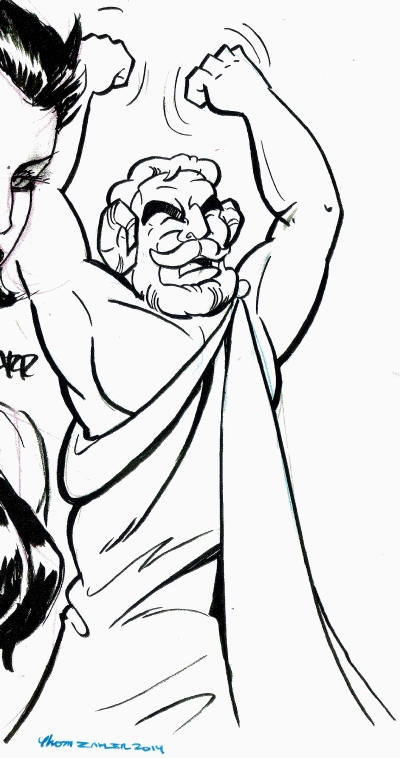 King Zeus is basically the Maxie Zeus of Martian Manhunter villains, except he's cooler and actually predates the Batman foe by nearly twenty years. Zeus was one of J'onn J'onzz's earliest true super-villains, as in a dude wearing a costume and demonstrating "powers" (although Zeus' super-doings came from gadgetry.) I unfortunately haven't done a biography page for him that I can link to, but he still rates some commission love.

I became bored with full figure drawings being drafted for this blog, and wanted to do something different for Martian Manhunter's 60th anniversary year. I started compiling "jams" of interacting figures on one board by different artists. This was unfamiliar territory for me, with its own quirks and tricks. For instance, one page from my first attempts was intended to be a landscape filled with knee/waist up drawings of villains, until one artist drew a large bust instead. Once the "rules" of the page were broken, I tried to figure out how to salvage it as a cohesive effort. Ultimately, Thom Zahler came to the rescue, drawing a broad figure who served as a good transition from the busts to fuller figures. Following his work on Roh Kar and Vulkor, the Capsule Master, I knew I could rely on him to transition away from Scorch. This is a good looking figure that brought out aspects of the character I'd overlooked, especially his boss ram horns!

Posted by Diabolu Frank at 1:09 AM