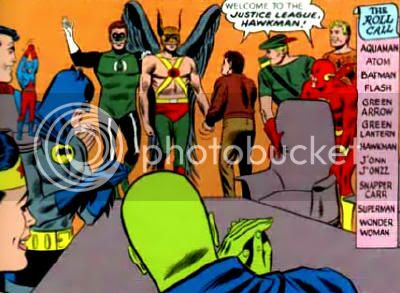 The Martian Manhunter's solo stories in House of Mystery had degenerated into monster-of-the-month juvenile pablum early on, and no one seemed to think he was essential to sales on Justice League of America, either. The team book began slowly phasing J'onn J'onzz out once Superman ably and more lucratively filled the Alien Atlas role, plus there were new heroes with greater potential fans were clambering to see join.

For instance, the Manhunter from Mars only appeared as part of a meeting at the start of the story where Hawkman was inducted into the League. The Atom had actually invited the Winged Wonder to join, which was probably why he also had the uncomfortable task of explaining to Hawkgirl why she wasn't in (due to League by-laws about having only one member join at a time and mutter shuffle...) Shayera Hol was cool about it, even though she wouldn't finally join the team herself until thirteen years later!

Hawkman was greeted by the full team and even given a plaque. "I've already shared adventures with the Atom and Aquaman-- and I'm looking forward to fighting crime and injustice along with the rest of you!" In fact, the Hawks would team-up with the Flash and Martian Manhunter almost immediately, but for now, Green Arrow announced that, "We hate to break away but Superman, Aquaman, Atom, J'onn J'onzz, and I have important cases to work on!"

"Riddle of the Runaway Room" was by Gardner Fox and Mike Sekowsky.
Posted by Diabolu Frank at 12:00 AM