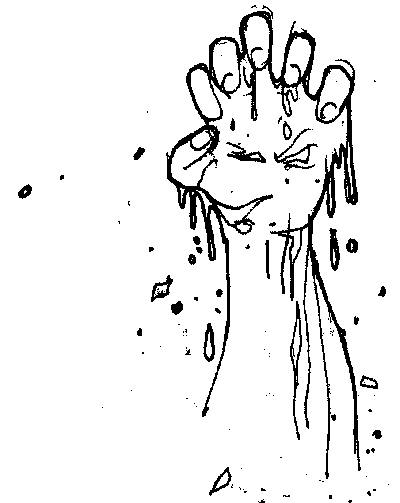 Back in 2014, I started a series of artist jams related to the Martian Manhunter's 60th birthday. Some of the attempts were just messes of random drawings, others coalesced better but still got away from my intentions, and at least one has awesomely been near exactly what I hoped for (with one dud I hope to fix somehow down the line.) The picture seen here was from a still-developing piece that only had two drawings done last year, but I liked them so much that I became very choosy about finding the right "collaborator" to continue it this year. As it turned out, I made the right choice with Antoine Mayes, a seemingly unknown local artist who doesn't even have a deviantART page.

Mayes put a lot of thought into his drawings, as with here, where he explained that he gave the hand six digits because he imagined this was the construct of an alien intelligence that wouldn't necessarily understand that humans default to five, thus only approximating a giant aqua-recreation. I apologize for the less than stellar scan, but the gray inks gave me trouble, so I oped to go with a more basic representation here.