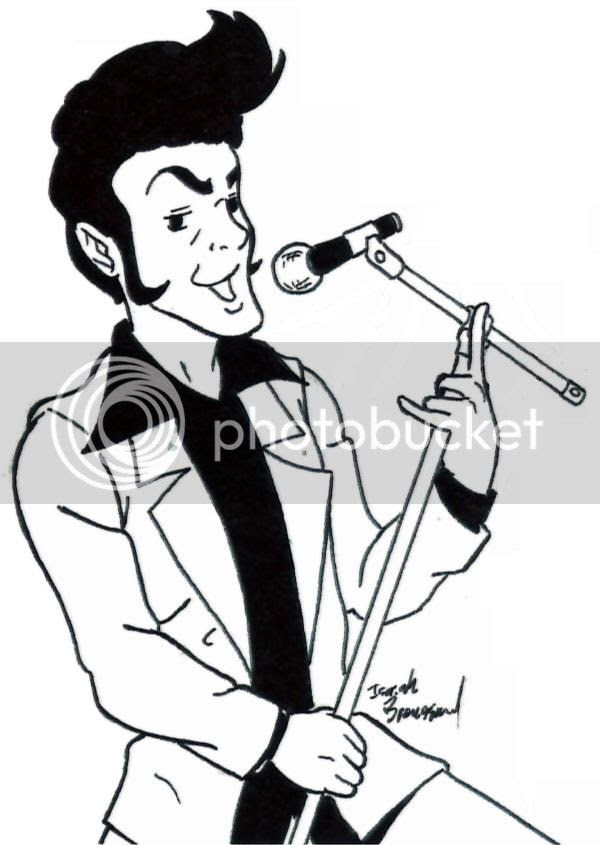 As I mentioned yesterday, in my initial zeal to pack a ton of small character pieces onto jam pages in the belief I'd eventually get to everybody, I've ended up with two Perkins Preston commissions, and... c'mon-- Perkins Preston? It took me years to finally remember the guy's name and in which order to say it (hint: the least natural and realistic option.) It's not that I dislike Perkins-- he's an analogue for young Elvis Presley and I have indeed been to Graceland-- but when I think of all the Martian Manhunter characters that are unrepresented in my commission collection I'm like "dang!"

That said, I love that one of my favorite J'onn J'onzz stories, American Secrets, is represented in these jams, and I'm also glad we finally get to see the guy really rocking instead of just running from Lizard Men. This was the first of two pieces I got from Isaiah Broussard (there was a lot of one hero/one villain per artist action in the early jams,) and I was very impressed by how well he represented such an obscure character in limited space. The character appears iconic here, recalling Elvis while clearly not intending to represent The King, with his big wild pompadour and his dual sideburn "horns." I like how Broussard worked in the microphone and Preston having a slick, unique hand gesture while working it. There's a lot of personality here without an excess of detail, and I enjoyed Broussard's work so much that I wanted to ask him to do the official banner for Rolled Spine Podcasts. The idea was to get drawings of me, Illegal Machine & Mister Fixit that could represent our crew's sense of self without providing the feds with overly functional wanted poster material when they eventually try to capture us, and I thought that either Broussard alone or a jam scenario would do the trick. Then Mac completely shut that idea down as something he wanted nothing to do with, and Broussard joined a host of other artists on the front end of these jams that I only waved at and show the slow progress on these things as they've trucked along. That said, I'm still going to run the idea past Fixit, and if he's game we'll steamroll Mac and do this thing!

For more from Isaiah Broussard, check out his Deviant Art Gallery, Facebook Page & Twitter feed! Also, if you're bummed I didn't get a New 52 Martian Manhunter from the guy, how about this Piccolo versus match?
Posted by Diabolu Frank at 12:00 AM