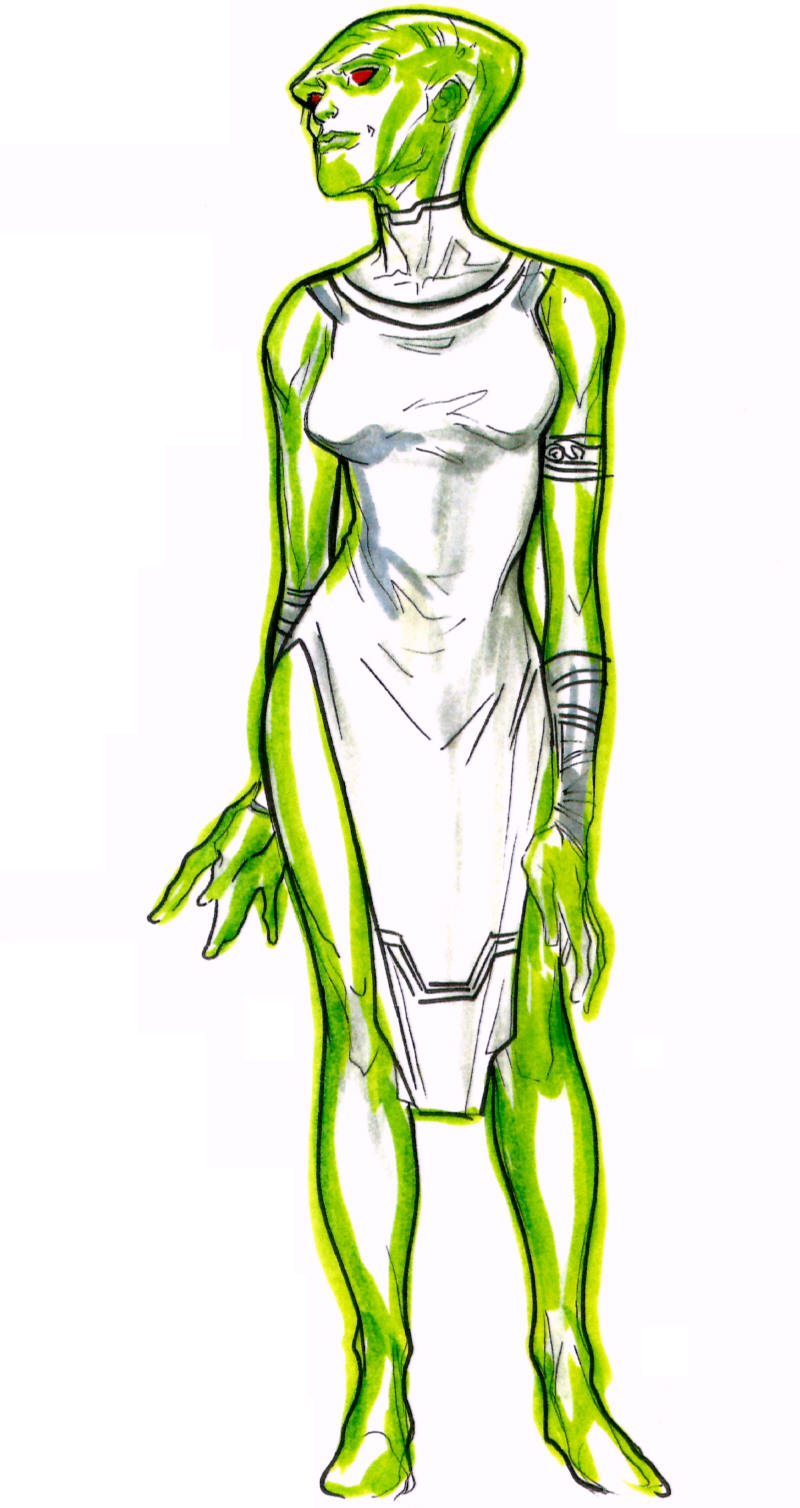 The second subject drawn for my "grail jam" was M'yri'ah, the deceased wife of J'Onn J'Onzz created in 1988, who went unnamed until 1998, and then another seventeen years later had her whole existence pointedly brought into question (although I think she'd gone unmentioned since the 2011 New 52 reboot anyway.) It's a weird situation, because the majority of modern fans who have an interest in the Martian Manhunter define him through being a widower and bereaved father, which has even factored into his animated adaptations. On the other hand, J'Onn supposedly "forgot" that he was once married with child, attributed to psychological trauma and telepathic tomfoolery, in retroactive continuity assigned 33 years into his comics career. Even in the cartoons these loved ones only appear in vague flashbacks and additional episodes of mental whammies, plus the cartoon pronounced her name "My Rhea," and I'm sorry, but I already have enough trouble bouncing between anglicizing it as "Maria" or "Mariah" without descending into pure gibberish. Further, John Ostrander is the only writer who ever delved into the character at all, and he still left her an ill-defined victim/motivational aid of single dimension rather than none at all (which is why I've been doing this blog since 2007 but still don't have an in-house biographical profile of her to link to. Try DC Wikia.) I really like the depth M'yri'ah & her daughter's passing bring to the Manhunter's origin, but should she really be jettisoned from the canon, I'm not emotionally invested in the character for herself.

Still, I wanted a full figure rendering of M'yri'ah in a specific context by one of the swell name brand artists attending this year's Space City Comic Con. I learned from my initial launch into the world of collecting art jams last year that without a clear picture of which artists and characters you want in a well defined theme and time frame, you end up with a bunch of partially completed or conceptually "ruined" efforts. My hope was to get this entire jam done at the one show, and I spent a lot of time figuring out the logistics. In a first, I actually set the blank 11x17" page in a landscape format and placed green Post-It notes at the approximate position and relative height where I wanted specified characters by premeditated artists "assigned" to them by name, which were still in place when I made the downsized color Xerox for scanning at this stage in the jam's process.

After looking at a variety of internet-posted commissions at length, I decided Ken Lashley was the best choice to deliver an attractive, dynamic, non-exploitative representation of the Alien Atlas' bride. I've been a fan of Lashley since his run on Excalibur, and one of the bright spots in the New 52 has been his being given a lot of cover work at DC in recent years. I still agree with my assessment, even though I'd have never predicted this specific piece, and wouldn't recognize the artist's style here if I didn't already know it was him. The art reference was from a comic drawn by Rick Leonardi, who I feel has done the best version of M'yri'ah to ever see print. I think Leonardi's pensive take influenced Lashley, who mentioned wanting to make a point of posing her to maximize the visibility of her unique alien head and garments. I couldn't get it to translate into the scan, but Lashley heavily augmented the dress with various shades of gray tones that are barely hinted at in the JPEG, which is a shame. You can still see a bit of the abdominal definition it lent. I dig the detailing of the neck and collarbone, as well as the cool contorted xeno-hands. There's a delicacy to the body lined and posture I appreciate. Like I said, it doesn't look like the artist's usual style, but it seems like he stepped out of his comfort zone to better represent the character. The lively colors were also thrown in as a bonus, and they appear here more limey than the natural shades on the actual art board. I especially enjoy M'yri'ah's bittersweet expression, seeing as she's meant to be a loving wife and mother in a celebratory setting, but is also separated from her husband by the veil of death which she traversed alongside her daughter after both were massacred with most of the Martian species by another member of their family. That ambivalence plays extremely well in the finished collaboration.

More from Ken Lashley
The J'Onzzes
Posted by Diabolu Frank at 12:00 AM