Disclaimer: Knowing full well there is a wealth of resources available to fans of the "Justice League" animated series, I have no intention of doing a bunch of dry story synopsis with the occasional new screen grab. I will chronicle, within reason, J'Onn J'Onzz's specific journey over the course of the series, but chiefly I will be reviewing the episodes through my own jaundiced perceptions. 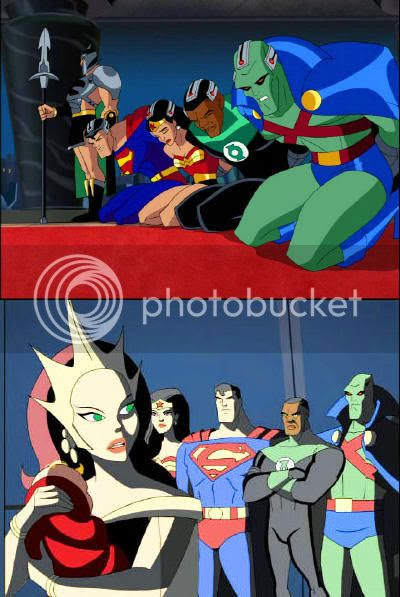 Martian Manhunter and friends follow Aquaman under the sea, where they engage Atlantean warcraft. J'Onzz allowed a pursuer to pass through him and into a reef. The entire League was then taken out by a mine field, and had power dampeners placed on their heads before being committed to execution by drowning. In the commentary track for the DVD of this season, actual creators from the show (not including its writer) ripped into this "bogus" and arbitrary turn of fortune. "This doesn't make any sense. People who live underwater-- they would have this drowning chamber?" They were rescued by Mera after conveniently being left with only two inattentive guards. Martian Manhunter and the others search the place, but find no sign of scion or son.

In full Dr. Evil mode, Orm decides to kill Aquaman and his son by chaining them to a rock. It was previously established Orm had the hots for Mera, which explains why she was left to save the League. Aquaman managed to get one of his hands free, but to save himself and child, he has to cut off his other hand with his belt buckle. I guess its better than the piranha from the comics, and certainly more heroic, but the logistics are still kind of stupid. More so, after spending all that time establishing Aquaman as a badass king with a hi-tech army, he gets a stupid harpoon grafted onto his numb? For serious? Time might have been short for a cooler prosthetic, but only a mostly indigent madman (like the one Peter David wrote when the harpoon was introduced in comics) would consider such a nutty replacement. A better writer could have explained my issues away, but Kevin Hopps wasn't that guy.

The League follows Orm's forces to where the villains are attempting to melt the polar ice caps to flood Earth. Martian Manhunter saves what appears to be the exact same Atlantean who had pursued him earlier from another jet ski collision, only to drop him a 100 feet are so back into the icy waters. Namor rides a whale into an Atlantean troop, almost as Aquaman might have, but without a clear indication of having commanded the sea life. Namor then battles Orm to the death and retakes Atlantis.

The voice actor for Namor, Scott Rummell,is better than any of the actual Justice League members'. He could have stood to have been a bit more haughty, and it wouldn't have killed them to throw us at least one "Imperious Rex," but otherwise a solid showing. I guess when they finally promoted the Avenging Prince to a full-on king, they had to show his having gained some maturity. Unlike the namby-pamby Poseidonians at DC, the Marvel Atlanteans are at their war-mongering, surface-world hating best in this episode. I hate that they lack their blue skin and breathing apparatus, but they are otherwise quite similar to those Fantastic Four classics you know and love.
Posted by Diabolu Frank at 12:00 AM