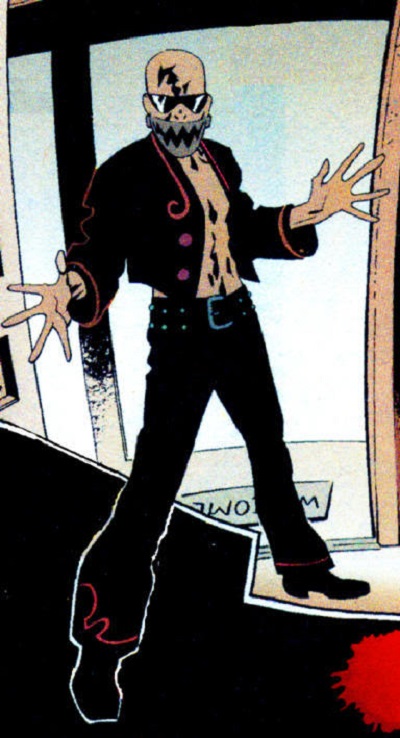 Doctor Trap was born the day his wife died in a battle between the heroic Justice Experience and the villainous House of Pain. Over twenty-four years ago, Coroline Anders tried to run for cover when these groups fought within the Washington Square Subway Station in New York City. She slipped off a platform, and was electrocuted by the third rail. Her husband was deformed from birth, an outcast who never believed he could find someone to love him. An eccentric genius, Trap vowed revenge on all the superbeings he blamed for taking away the only love of his life.

A brilliant mechanical engineer, Dr. Trap created a variety of vicious devices, which he used to slay at least thirty-five super-beings in the New York, Metropolis and Gotham areas. There are conflicting reports as to who was his first victim, but it is believed he initially struck the Experience's most powerful sometimes member, The Bronze Wraith. Better known today as the Manhunter from Mars, "Bronze Wraith" was left an amnesiac by this gambit. Doctor Trap was then free to murderer the individual members of the groups involved in his wife's death, as well as other metahumans in no way involved. Trap's murder spree lasted two years before he was captured by the Justice Society of America, with the aid of the recovered "Bronze Wraith."

Decades later, Trapp used vague “connections” within the Cadmus Project to contact the psychic “vampire” Bette Noir. The Doctor ordered her physical body to be killed, but allowed Noir entry into his mind as a safe harbor until she could find a more permanent residence. Trapp then waited until his lawyers could press for his release from his lengthy incarceration, drawing the attention of J’Onn J’Onzz. Convincing the Martian to scan his mind and prove he had moved beyond his bloodlust, Doctor Trap instead forced Bette Noir to incapacitate the Manhunter via a psychic loop of his most painful memories. Trap escaped custody as the Manhunter struggled with his new condition, then re-outfitted himself to pursue the daughter of his first murder victim, D.E.O. agent Cameron Chase. The pride of the Acro-Bat laid a trap of her own, but the barrel of her firearm was bitten off by the Doctor’s mechanical jaw. The Sleuth from Outer Space deduced Trap’s destination, however, and convinced Bette Noir to do unto the Doctor as she had done unto him. Trap was turned over to police custody, where he presumably is still serving twenty-three life terms.

Distinguishing Features: Dr. Trap's jaw and mouth have been replaced by hinged steel "teeth" that resemble a bear trap. This device is capable of tearing out a human throat. Also, Trapp was thirty-seven years old at the time of his capture, making his rather fit for a fellow now in his sixties.

Quote: "An elaborate trap with no ending. I anticipated every step and now he will know torment... as I have known it ever since my wife died at the hands of him and his ilk."