Martian Manhunter in the 1950's 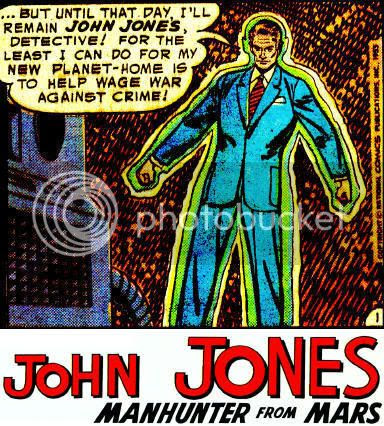 The original Manhunter from Mars, Roh Kar, was introduced in a 1953 Batman story by Edmond Hamilton and Lew Schwartz. Two years later, elements of the story were reused in an ongoing series of back-up stories for Detective Comics called "John Jones, the Manhunter from Mars." The first few installments were written Joe Samachson, before being turned over to Dave Wood, and finally Jack Miller. Joe Certa drew every solo John Jones story for thirteen straight years, usually from a Miller script. John Jones was a plainclothes police detective who used extra-terrestrial powers to help solve crimes both mundane and fantastic. By 1958, super-heroes were coming back into vogue, and John Jones was increasingly seen in his costumed alien alter ego of J'onn J'onzz. Even still, he rarely fought what could be considered super-villains, sticking mostly to gangsters and the occasional alien invaders, though more science fantasy elements crept in. The stories tended to be breezy, brainless fare; not to be taken at all seriously, but not without their absurd charms, either. The final story of the 1950's starred a foe called "The Human Flame," and would herald the Martian Manhunter's being fully embraced by the super-hero community in the coming decade.