Martian Manhunter in the 1960s 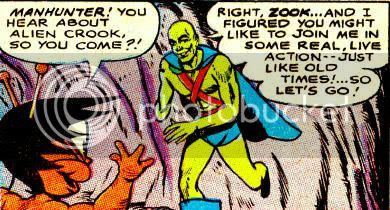 At the dawn of the 1960's, the existence of a Manhunter from Mars became public knowledge, and the strip itself drifted ever further from its roots as a sci-fi police drama. The Martian Manhunter served as a founding member of the enormously popular Justice League of America, fully embracing his new status as a super-hero. J'onn J'onzz also became one-half of the first super-hero "team-up" in "The Brave and the Bold." However, in the midst of this revival, the Manhunter's home title, Detective Comics, slipped closer to cancellation. Julius Schwartz took over editing duties on the book, and replaced the Manhunter from Mars feature with Ralph Dibney, the Elongated Man.

Outgoing editor Jack Schiff took the former Batman villain Professor Arnold Hugo and new Manhunter sidekick Zook with him to "House of Mystery," where J'onn J'onzz would star. The Detective John Jones identity was "killed-off," with J'onn J'onzz taking on the crusade of tracking down the elusive Diabolu Idol-Head. When that failed to reach an audience, Robby Reed and "Dial 'H' for Hero" pushed J'onn J'onzz to back-up status once again. J'onzz assumed the new identity of "Marco Xavier," and pursued the international criminal organization VULTURE. By the end of the decade, both Reed and J'onzz had been evicted from "House of Mystery." Further, the Martian Manhunter had been written out of "Justice League of America," and was left with nowhere to go but into obscurity.

JUSTICE LEAGUE OF AMERICA
#1: “The World of No Return!”

THE BRAVE AND THE BOLD
#50: "Wanted--The Capsule Master!"

JUSTICE LEAGUE OF AMERICA
#31: "Riddle of the Runaway Room"