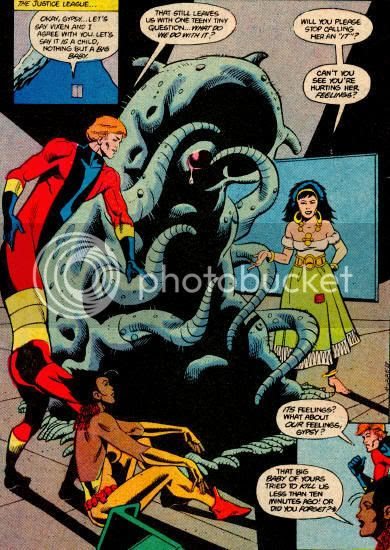 Despite my many fanciful "anniversary" posts, the only ongoing appearances J'Onn J'Onzz made in the 1980's were in the "Detroit" and "International" era Leagues. I think most would agree that it wasn't until JLI that the Martian Manhunter came into has own as a modern age character, but that organization was so large, I would have to devote an entirely seperate blog to cover it. While I'm a fan of that period, I think they receive adequate fan coverage, so I'm looking forward to focusing more tightly on J'Onn J'Onzz when those issues comes up.

The Detroit League, on the other hand, consisted mostly of new characters with limited histories prior to or since the book's run, and almost all of them have inextricable ties to the Martian Manhunter. When I started synopsizing their adventures, it only made sense to cover each member, at least for the duration. Also, I genuinely care about a number of these characters to the point where I'd like to continue their coverage beyond appearance with the Manhunter from Mars. This has led me to start Justice League Detroit: The Blog. For now, it consists of posts from here and re-edited posts from my catch-all ...nurgh... blog. However, I've been re-scanning old images and adding new ones for weeks now, to improve quality here and to better reflect the expanded depiction of the full team there. I plan on making about a post a week, which means new material will inevitably make its way to the Detroit blog. I hope everyone with an interest in the team checks it out.

Also, I'll be out of town for a few days. I'm very pleased Blogger now have post-dated scheduling for posts, which will magically appear at midnight in my absence. However, if it takes a short while for any comments to appear or be responded to, you now know why.

"The blog of Gypsy, Vibe, Vixen, Steel II, and the Martian Manhunter; along with Aquaman, Batman, Commander Steel, Dale Gunn, Elongated Man, Sue Dibney and Zatanna. Covering all things related to the Detroit Era membership of the Justice League of America. A division of THE IDOL-HEAD OF DIABOLU: A Blog For J'Onn J'Onzz, the Manhunter from Mars."
Posted by Diabolu Frank at 12:00 AM