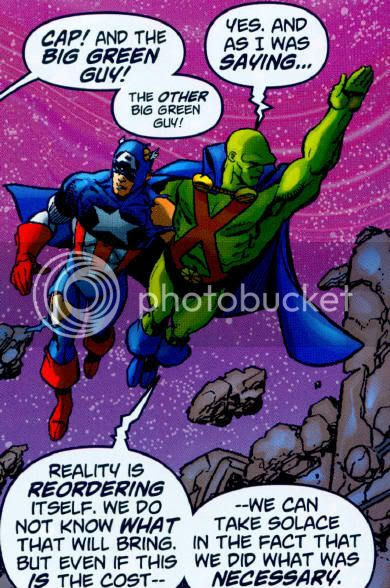 The Vision could not accept the circumstances of his life in the "true" reality, having been disassembled, divorced, and lost his children to demons. A Martian telepathically insisted, "Calm yourself, Avenger. Listen to reason."

An assault on Krona's stronghold was planned, with the Manhunter helping to construct a super-ship to carry the teams derived from powerful elements of both universes. Superman asked the Sentinel of Liberty to lead the assault from a familiar communication hub. "Mindlink established. Captain America-- you are in command."
"Thank you, J'Onn."

Manhunter maintained America's authority for much of the fight while engaged in it himself, punching and blasting Parademons with Martian Vision. A shift in reality cost and added heroes to the assault. "J'Onn, update the newcomers-- feed a status bullet direct into their minds!" The conflict raged, with Manhunter briefly paring with Quicksilver and Bloodwynd joining the fight. Shown among the downed were Vibe and Steel of the Detroit League. Curiously, Manhunter himself was replaced by a second Bloodwynd, and communication broke down for good. Thankfully, the mission ended well, thanks particularly to Vision, Superman, Flash and Hawkeye.

The proper Justice League and Avengers of the era were restored. She Hulk spied two figures flying in from the distance. "Huh? Hey! Cap! And the Big Green Guy! The other big green guy!"

"Yes. And as I was saying... Reality is reordering itself. We do not know what that will bring. But even if this is the cost-- we can take solace in the fact that we did what was necessary." Part of the reordering was having the the Spirit of Redemption separate the twin worlds. "We fought beside him earlier today. He is Hal Jordan. Once a Green Lantern. Now the Spectre. He is one of those who paid the greatest cost to fight this fight. And even now, even returned to this state... he fights on."
"I'm... impressed."

The heroes saluted one another and parted company. The Gamemaster was restored, and he discussed the outcome of events he'd set forward with Metron for sport. The essence of Krona was now sealed in a "Cosmic Egg," waiting to one day hatch...

Posted by Diabolu Frank at 1:00 AM

Thanks for the look at the JLA/Avengers crossover. It made me pull out my copies and read them today. I wanted to point out that in either #3 or 4, Libra (or someone who looks like Libra) can be seen in the background. You don't think anything from this series will be involved in Final Crisis, do you?

Hold your horses, pardner. I've got at least two more days of coverage coming before we wrap this up.

Anyhow, aside from a wink and a nudge, anything related directly to this story would be off-limits. It would require approval from Marvel Comics, with whom relations have been frosty for pretty much the entire time since this series' release. I'm glad this book made it out though, if only because the hardcover release included all that information on the '83 project, a holy grail of sorts. Also, I'm happy you've enjoyed the page and commented.