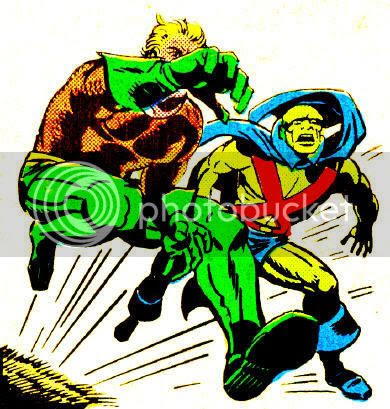 So the fact of the matter is, I'm plum worn out this week. Been taking on too much in too many directions. Can't seem to stop myself. It's shown here, as much of this week's posts have been spotlights on other people's online efforts, and the weekly installment of a synopsis series I wrote weeks ago. I planned to milk the in-tar-web again, tonight, but was diverted by a trip to the Aquaman Shrine, which has been conducting an "Aquaman & Manhunter BFF" week. So too has Mr. Kelly's sister blog, Coming Super Attractions, this time centered on Martian Manhunter advertisements. Mention was made of Rob's missing his own copy of DC Spotlight #1 (1985,) so I decided to supply him with scans both here and at my own newly active sister blog, NURGH!

Aquaman and J'Onn J'Onzz have a lengthy history together, as do the Shrine and Diabolu blogs, which I first touched on here. Additional highlights can be found here, here, and here. Notice of this is also being served at Michael Netzer Online, as our most honored artist has posted a lovely preliminary depiction of the friendship. As I noted on first sight, "The sketch is awesome, and of course, Aquaman would be the one contrary son of a bitch to turn his nose up at the Oreos/Chocos/Diabolu Brand cookies. I'm glad this piece hews closer to the good-natured J'Onn of my banner, rather than the eerie take from your petition piece. Sure, I like the Manhunter in stern badass mode, but the character I love can still crack a smile when the situation calls for it. That's why I have to say, once again, bless you for intuiting just the right tone for my banner. You do a wonderful job of capturing an essential element of J'Onn and Arthur's relationship-- that J'Onn is always the one reaching out in friendship, regardless of how stand-offish and stubborn Aquaman can typically be."

Initially, the picture was just of the pair. However, our brother-in-blog The Tiny Titan was an early champion of the "Save J'Onn" campaign, even adopting the now ubiquitous banner before just about anybody (myself included.) Damian's enthusiasm has extended to his own unofficial "Ray + Ryan <3 J'Onn" series, which I discussed at length before an HTML error related to that stupid "<3" ate it. Long short-- Michael Netzer appreciated it, and just digs on Ray Palmer, so the trident up he scurried!

So as to not miss anyone, there's never any shortage of Martian love at Fotolog, and fan of all things related to Detroit Justice Luke of El Jacone's Bunker shot me a link to a Sampler I myself have never owned, hosted here!


Please stop me before a link again. Save J'Onn! Save Arthur! Save Ray! Save Ferris! Save me a few hours to draft some posts for next week!
Posted by Diabolu Frank at 12:00 AM

I sincerely hope that this is all misdirection on the part of DC -- that J'Onn will play a big role in the Final(ly) Crisis, and get back some of his classic luster -- such as it is. I think Ray Palmer has no chance to survive. And how do you kill off Aquaman when he is already dead? Killing AJ would suck, but if it brings back Arthur/Orin, well, so be it!

Kirby Aquaman! Woo-Hoo! That MM looks pretty weird though. I like the energy of Aquaman's bounding pose though. I always liked the idea that he could travel like the Hulk, if he wanted to, except with more grace. I definitely think the friendship between these two is so very natural, but also so often miswritten.

One of the things I'd do if I ever wrote Aquaman would be to play up his gymnastic prowess. This is a guy used to thinking in three dimensions, so it would only make sense he'd be able to move like Spider-Man by way of Jim Aparo's trademark grace.