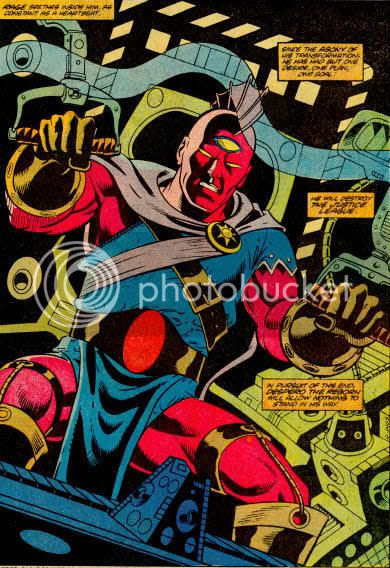 Despero flew through space in a golden craft vaguely resembling a grasshopper, heading toward a massive amorphous blob of violet and green...

"Rage seethes inside him, as constant as a heartbeat. Since the agony of his transformation, he has had but one desire, one goal, one plan: He will destroy the Justice League. In pursuit of this end, Despero the Reborn will allow nothing to stand in his way.

The Torq grew to maturity a billion years ago, on a giant gas planet orbiting a star in the galactic core. For more than thirty million years, it has wandered this arm of the galaxy, thoughtful and at peace, a silent, wondering observer of the universe. The Torq is the very definition of innocent bystander. Even the warlike Psions would alter their course, rather than harm such a harmless creature."

Despero's craft erupted through the Torq, spray purple ectoplasm into the void.

"The thought never crosses the hunter's mind. A billion years of wonderment are snuffed out in an instant. He has places to go, things to do. People to kill. Nothing can stop him now."

Further on, Despero spied the former Justice League Satellite, still hovering 22,300 miles above Earth. As was said, nothing would stop Despero, as he plowed his spacecraft headlong into the vessel. "Where are you, my enemies? Show yourselves, that I may destroy you!"

"Beneath his booted feet, the skeletal satellite shifts and sways, knocked from its orbit by the impact of his starship. Already, he could feel it drifting Earthward... but what he sees about him makes all other considerations unimportant. They are not here. Their satellite headquarters is empty... a ruin... abandoned. The thought is a hot blade twisting in his skull. THEY... ARE... NOT... HERE!"

Despero vented his fury audibly and through energy beams emitted from his eyes.

"There is only one place where they could be. Under his feet, the satellite's movement is more pronounced now; and he feels the first whispers of atmosphere rushing past like a distant wind. Earth. They are below him... somewhere... on the Earth. Then that is where he will join them. Atmosphere shrieks about him; the heat of re-entry is incandescent, but no more incandescent than the raging fury in his heart. He survived the Flames of Py'tar, and came forth reborn; this too shall he survive. Nothing will stop him now. He is Despero. He is destiny."
Posted by Diabolu Frank at 12:00 AM

Aaaaand I still like this look for Despero better than the hulking, purple-Hulk look he would come to sport. Looks more... civilized.

My feeling us that Despero should wear pants. The lack of a visible phallis could go a long way toward explaining his latter-day rage issues, but I still feel pants are in order. I don't mind his inflated dimensions and I love the shark teeth, but some consessions must be made to remind people there's more to the character than carnage.