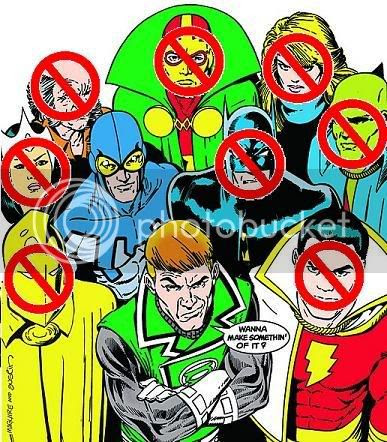 It'll be a few months yet before we touch on Justice League International here, but I wanted to get this off my chest...

In my formative years as a comic book geek, the Super Friends were my Justice League. The fact is, the actual League had no newsstand presence where I lived, so my coming into contact with their comic book incarnation was reserved for other people's collections. I rarely got to read any of those copies, and was put off by the disparity between the gloriously busy George Pérez covers and the staid interiors by other hands. Also, I don't believe I read a single Detroit period adventure until the late 90's. I'm not positive about this, but there's a good chance the first Justice League comic I ever owned was in the Giffen/DeMatteis era.

As I understand it, a great many fans of the Satellite League were mighty put-off by the modest, multicultural team that was foisted upon them by Gerry Conway and Chuck Patton. This proved the source of lingering resentment that was likely assuaged in the closing pages of the Legends mini-series. There, readers were presented with a modern, powerhouse collection of heroes to usher their team into the Post-Crisis DCU. Well, except that that book's new creative team had restricted access to Superman, Wonder Woman, Flash, Green Lantern, Aquaman, Hawkman, Hawkwoman, the Atom, and even Red Tornado. Worse, as the serio-comic nature of the new book became more apparent and solo developments progressed, Captain Marvel, Black Canary, and Drs. Fate & Light were also soon gone, with the already gifted Batman stepping back some. Faced with a collection of C-listers, the creative team played up the humorous aspects of the book all the more, winning over readers as an ensemble and relief from the grim approaches of most comics of the day.

I was one of those readers, coming on with the seventh issue, and staying through until the early 30's. By that point, I'd begun to see a shift away from the comedy I'd already come to appreciate through Giffen's Ambush Bug toward more serious fare. The problem was, I couldn't take most of the characters seriously, nor did I find them especially compelling regardless. I revisited frequently, but for me, the best days were behind the team.

On the other hand, there were exceptions, as I'd entered the book with an interest in the Martian Manhunter that only grew with the association. Guy Gardner remained a favorite for many years, and I even bought his solo series. The same was true of others, and I retained an affection for the line-up as a whole, when handled properly. Obviously, that wasn't the case for much of the 90's. In fact, I think creators galled by the line-up took a special delight in having their Silver Age "betters" outshine and otherwise abuse the JLI. It should come as no surprise then that I was heartened to hear Giffen, DeMatteis, and artist supreme Kevin Maguire would reunite to revisit the old favorites... or not.

While I enjoyed both of the mini-series the team produced in the 2000's (as well as their work on the Defenders,) I had some issues with the make-up and chemistry of the rechristened "Super Buddies." I was very pleased Max Lord was over that Lord Havok business and L-Ron was restored to his robotic body, but what were they doing alongside European Leaguers Captain Atom and Elongated Man, not to mentioned the quasi-vestigial and virginal Mary Marvel? Most of all though, for obvious reasons, I missed the Martian Manhunter. So long as he was present to play straight man and gell, all would have been right with me. I recognized he was in the big League now, but I do believe that was during the slow decline of the book into cancellation. I allowed for the "Super Buddies" being a showcase of characters long out of the limelight though, and soldiered on.

Then they started killing off all the JLIers, and Max Lord was proven so irredeemably evil as to be executed himself. Besides the general offense of snuffing out characters regarded less as super-heroes than comedic foils, he whole thing fairly reeked of the Old Guard vs. JLI resentments dating back to the Detroit reconstitution. Thankfully, surviving JLI characters have been allowed to re energize and even regroup, most recently in acclaimed issues of the new Blue Beetle...

...except again, where is the Martian Manhunter? The character hasn't been a member of the Justice League in over two years, his poorly received mini-series wrapped long ago, and he rarely makes guest-appearances. As an added bonus, he's likely to die soon in Final Crisis, and he can't even get added to a JLI card not involving time-travel. In fact, most of the JLI members in these reunions either star or co-star in current ongoing series, even some of the dead ones! As a patron saint of also-ran super-heroes no longer associated with he big guns of the DCU, it seems to me that J'Onn J'Onzz is now being treated poorly in part because he acts as a bridge between the twin camps of League fandom that both seem entirely too happy to burn. He's too powerful and respected to be allowed in the new JLI clique, but too unpopular and vulnerable to return to mainstream prominence. Is the price the character has to pay for finally crossing over into mass-media that his roots should be stomped all over back on his home turf? And why does this all seem like an 80's Patrick Dempsy movie?

Also, why is it we're at the point where the JLI means Booster Gold (joined early, stayed late) Beetle, Fire, Ice and sometimes Power Girl? Why don't the contributions of bigger names like Black Canary and Flash count anymore, or lesser lights like Metamorpho and Mr. Miracle? Who decided there were only a handful of characters allowed to represent the JLI?

My final question is, where does Martian Manhunter belong? Has he grown too big to be allowed friendship amongst the JLI peers that kept him in the public eye after the Detroit debacle could have left him a footnote? Would it have done him more good to wait until Grant Morrision revamped the founders' League, or would the disdain from Detroit haters have carried over regardless? As most of J'Onn's development as a character and the investment myself and others made in him came from his time amongst the International League, would it have been better for him to remain a lower profile but fondly remembered member of their ranks? Can't we all just get along, and maybe show Manhunter some love?
Posted by Diabolu Frank at 12:00 AM

just to nitpick a little about your comment:
"was put off by the disparity between the gloriously busy George Pérez covers and the staid Dick Dillon interiors"

while solid and dependable, Dick Dillin was definitely no George Perez but Perez' first JLA cover wasn't until 184, the issue that he replaced Dillin upon Dillin's death. you're almost certainly referring to Don Heck's run from 199 through the low 200s. i know i was highly disappointed by that disparity...

By golly, I do believe you are correct, sir! Furthermore, when I finally started reading the Dillin issues as an adult, I rather liked his work. I just assumed my memory of poor draftsmanship was from the underdeveloped tastes of youth. Don Heck, to this day, is a bit of a pill for me. I expect you're on the money there, as well, and edited my post to not speak ill of Dick. Thanks for the head's up.

yeah, i had almost the exact same reaction to Dillin, too. growing up, i remember liking only the Dick GIordano-inked issues with his artwork, indifferent to the McLaughlin ones and especially hating the Joe Giella ones but now that i'm older, i really appreciate all his stuff. To this day, JLA 144 is one of my all time favorite comics (with a prominent role played by a certain green skinned Martian)...

and a similar reaction to Don Heck. i tried to rationalize it... heard about his personal problems... but the work never did it for me... in fact, i kinda hated it (Sorry, Don). how great would that JLA/JSA/All Star Squadron crossover been with Perez' artwork? sigh.

btw, enjoy your site. i really hope they don't kill off MM. it would be yet another pointless DC 'death'

That's just it... I'm not sure when exactly I first saw Dillin's art now. He'd already passed before I ever read Justice League, so it must have been in back issues, and possibly as late as the 90's. It seems like it was an Englehart issue with his quasi "Mantis" carryover character, and I dug that.

I STILL haven't read numerous key Martian Manhunter appearances, including JLofA #71 and 144. Looking forward to it, of course, but I'm waiting for the trade. So what if it's been thirty years or more...

I'm glad you like the blog, meng. I see the little counter go up on the daily, but I'm lucky to get a peep or three a week, usually from the same few. The majority is definately silent around here, but I figure if folks are around, they must not hate things hereabouts. Better to know for sure, though. ;)