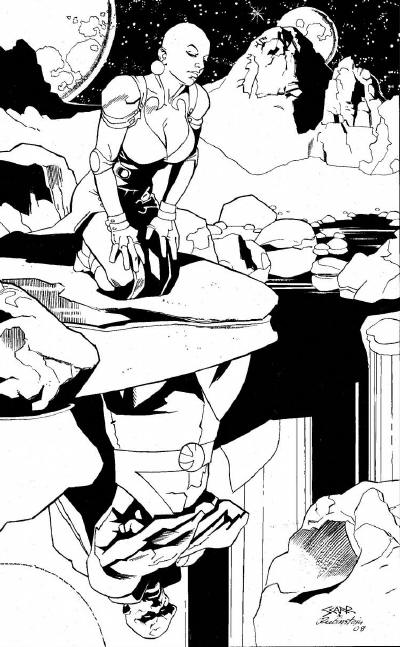 I found another great commission at the blog of one SwanShadow, but I'll let him explain the concept:

"Common Elements commissions are like Forrest Gump's mom's box of chocolates: You never know what you're gonna get. Often, the artist simply draws his or her best representation of the two characters I've assigned. That's an excellent outcome in itself. On other occasions, the artist will go beyond the characters themselves, and create a unique milieu in which to set the figures. That, of course, is even better."

SwanShadow goes into more detail here, but the gist is he was impressed by the thought that went into Steve Carr's twin telepaths, and I'd have to agree. I remember Carr for some fill-in work he did on Wonder Woman during the Messner-Loebs run, and dug his stuff. Shame he hasn't seen more work in recent years.

One more interesting note: Both of these characters died recently to satisfy the bloodlust of a "sequel" crossover...
Posted by Diabolu Frank at 10:23 PM