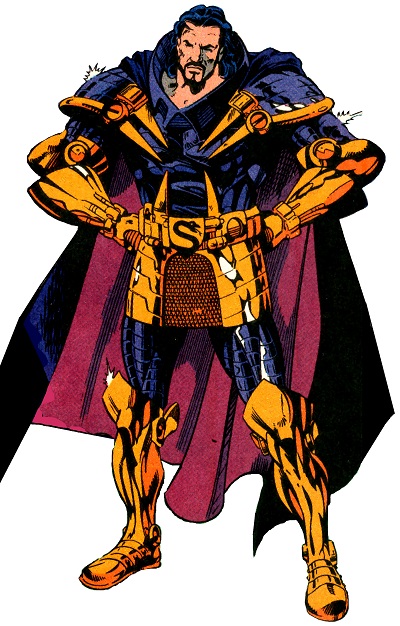 History:
Vandar Adg was a caveman who stumbled upon a meteor which gave him a variety of super-powers, and more than enough time to master them. Under a myriad of assumed identities, he has pillaged and manipulated the world for over 50,000 years, throwing in with dictators ranging from Attila the Hun to Adolf Hitler. Savage prefers the role of puppet master, allowing figureheads to take the glory while he retains the true seat of power. Savage founded the Illuminati, a shadow government that supposedly runs the world, before the fall of Atlantis. He has often been involved in the plans of villainous super-teams, sometimes without even the members' knowledge.

20,000 years ago, Vandar Adg was confronted by his first native Martian. "We had so few words, back then, the Cro-Magnons... hardly more than grunts... but every culture has a word for destruction. We called it Dakath... 'The Burning.' It took me two months to figure out a way to slaughter it. In that time... it destroyed thousands. Twenty millennia and five lifetimes of wealth later, I learned where it came from. Mars. It's a Martian." Adg kept the skull in a box for the duration.

In the Middle Ages, Vandal Savage served for a time in the Demon Knights, a precursor to the modern Stormwatch organization that the J'Onn J'Onzz also once affiliated with. Savage's first major recorded run-in with the Martian Manhunter came during the initial year of the Justice League of America's operation. Concerned about a new heroic age coming, Savage assailed the group with a variety of villainous collectives. John Jones was the first among the Leaguers to devote serious time to investigating Locus, an criminal organization with ties to Savage. The Earth was soon forced to fend off an invasion from the alien Appellaxians, placing Savage and the Justice League on the same side, though J'Onn J'Onzz was forced to expose himself to great peril in order to sabotage an attempt by the immortal to adulterate the team while rebuffing the aliens' assault.

Whether Vandal Savage and the Martian Manhunter had sparred before in the interim, their next known engagement began during J'Onzz's time with the Justice League Task Force. Savage pointed out, "Much of my story is familiar to you, old foe." A daughter of Vandal Savage possessed of an x-factor that made her and her son prime candidates as organ "donors" in the event of his needing spare biological "parts" decided that the best defense was a lethal offensive. "Miss Watkins" sent an army of assassins to kill her father, or at least disable his operations. Savage tried to manipulate the Task Force into protecting him, but J'Onn J'Onzz soon learned the truth behind the attacks. So did Savage, who decided to personally slay the mother. Shortly after, he learned the Manhunter had actually impersonated Watkins, allowing the woman and her child to escape his wrath. "Your wit is as sharp as ever, J'Onn... You've meddled in my affairs... Soon, I intend to demonstrate exactly how you and your --children-- have displeased me, J'Onn." With that, he blew up their temporary headquarters, and a feud had begun.

Savage familiarized himself with the personal lives of the JLTF. When the team erected their new HQ, Vandal again paid a visit... This time, to kidnap the young hero and potential recruit Damage. Next, he learned the Ray had created his own worst enemy, Death Masque, and was ashamed to call on his teammates to dismantle it. Savage provided Ray with a high-paying job and his mentorship, as well as putting Masque in his place. Before turning to Savage, Ray had asked Triumph for help, and was refused. On learning this, Manhunter was furious. Thanks to Vandal's manipulations, a rift had been created within the group that would never heal. After a brawl between Manhunter and Triumph, the youth was near death, but was saved by Savage, who intended to someday collect on the debt.

The war between Savage and J'Onzz's forces came to an abrupt end, when the demonic Neron presented Triumph with a candle that would allow him to rewrite his personal history. Once it was lit, the continuity of his time in the JLTF became suspect.

Savage would next clash with J'Onzz during a desert battle in Egypt. Driven temporarily insane by the Hourman virus, Savage had unearthed a giant tank from World War II as part of his rampage. The tank was overturned by Manhunter, costing Savage an eye, and earning the Martian an eternal enemy.

After the Martian Manhunter conquered his fear of fire with the aid of villainess-turned-romantic interest Scorch, he was left vulnerable to possession by "The Burning." As "Fernus," the Martian slaughtered a couple hundred of Savage's troops in an unsuccessful attempt to reclaim the "Dakath" skull. With the help of Scorch and information provided by Savage, Fernus was defeated.

Most recently, Vandal Savage was present for the murder of J'Onn J'Onzz by Libra. J'Onzz was eventually resurrected, but his antagonism with Vandal Savage has not, at least so far. By some accounts, Martian Manhunter will continue to wage war on the immortal for another 800 centuries, so it's only a matter of time.

Powers & Weapons:
Immortal, resistant to injury, and able to accept "donated" organs into his body with relative ease. He has built up an immunity to telepathic probes. He's also superhumanly strong, and can create inter-dimensional warps. Savage's access to these and other powers waver depending on his physical, mental, and spiritual condition.

Quote: "Is that what you think I am? A criminal? I am Cro-Magnon... I have lived a thousand lifetimes. Crime is so...pedestrian."
Posted by Diabolu Frank at 7:00 PM

Vandal Savage reminds me of Doctor Doom. I mean, yeah Doom has had a long standing fued with Iron Man, but he is too universal a threat to have just one foe. Same goes for Savage and Manhunter. Still, they make for good sparing partners!

The parallel you mentioned was perfect. Never considered the similarity.