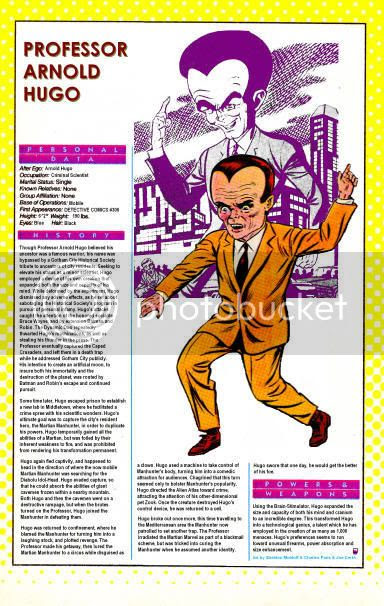 History:
Though Professor Arnold Hugo believed his ancestor was a famous warrior, his name was bypassed by a Gotham City Historical Society tribute to ancestors of city residents. Seeking to elevate his status as a minor scientist, Hugo employed a device of his own creation that expanded both the size and capacity of his mind. While deformed by the experiment, Hugo dismissed any adverse effects, as he set about sabotaging the Historical Society's program in pursuit of personal infamy. Hugo's attacks caught the attention of the honored socialite Bruce Wayne, and by extension Batman and Robin. The Dynamic Duo repeatedly thwarted Hugo's machinations, as well as stealing his thunder in the press. The Professor eventually captured the Caped Crusaders, and left them in a death trap while he addressed Gotham City publicly. His intention to create an artificial moon, to insure both his immortality and the destruction of the planet, was routed by Batman and Robin's escape and continued pursuit.

Some time later, Hugo escaped prison to establish a new lab in Middletown, where he facilitated a crime spree with his scientific wonders. Hugo's ultimate goal was to capture the city's resident hero, the Martian Manhunter, in order to duplicate his powers. Hugo temporarily gained all the abilities of a Martian, but was foiled by their inherent weakness to fire, and was prohibited from rendering his transformation permanent.

Hugo again fled captivity, and happened to head in the direction of where the now mobile Martian Manhunter was searching for the Diabolu Idol-Head. Hugo evaded capture, so that he could absorb the abilities of giant cavemen frozen within a nearby mountain. Both Hugo and then the cavemen went on a destructive rampage, but when the brutes turned on the Professor, Hugo joined the Manhunter in defeating them.

Hugo was returned to confinement, where he blamed the Manhunter for turning him into a laughing stock, and plotted revenge. The Professor made his getaway, then lured the Martian Manhunter to a circus while disguised as a clown. Hugo used a machine to take control of Manhunter's body, turning him into a comedic attraction for audiences. Chagrined that this turn seemed only to bolster Manhunter's popularity, Hugo directed the Alien Atlas toward crime, attracting the attention of his other-dimensional pet Zook. Once the creature destroyed Hugo's control device, he was returned to a cell.

Hugo broke out once more, this time travelling to the Mediterranean area the Manhunter now patrolled to set another trap. The Professor irradiated the Martian Marvel as part of a blackmail scheme, but was tricked into curing the Manhunter when he assumed another identity. Hugo swore that one day, he would get the better of his foe.

Powers & Weapons: Using the Brain-Stimulator, Hugo expanded the size and capacity of both his mind and cranium to an incredible degree. This transformed Hugo into a technological genius, a talent which he has employed in the creation of as many as 1,000 menaces. Hugo's preferences seems to run toward unusual firearms, power absorption and size enhancement.

Quote: "Fool! If you read the newspapers, you would know all about the great Arnold Hugo!"

All the other Who's Who entries have new art, but they gave poor Arnie a cut-and-paste job. The foreground figure is from the cover of Detective #306 and the background is a panel from House of Mystery #153.

Of course they are...

I think "Criminal Scientist" should have been listed as a career option in all those career path tests I had to take in high school.

Do you have a list of villains by number of appearances?

For silver age standards 3 appearances makes Hugo a recurring villain. I find it very odd that they didn't use him in the 90s, specially considering he fought Batman and got his Who's Who bio.

Rafa, Prof. Hugo suffered from what I call "The Who's Who Effect," where creators often unfamiliar with Pre-Crisis DC Comics relied upon the most readily available resource material to craft their stories, excluding all else. Hugo was not in Who's Who, and therefore wasn't in a comic book for over forty years.

Hugo did make it into the Batman Encyclopedia in the 1970s, but they reversed his name to the less appealing "Professor Arnold," and there's also the lingering confusion with the early and more notable Batman foe Professor Hugo Strange. Also, he came out in the largely disregarded late Schiff period in the Batman titles, he looks fairly ridiculous in a not especially interesting way, and his main claim to fame is as a Martian Manhunter villain. There's no such thing as a popular, prolific Martian Manhunter villain; only a handful of guys already known for other things that the Alien Atlas was lucky enough to become associated with (Despero & Darkseid, mostly.)

J'Onn fought Prof. Hugo in four stories, which is twice as many as Commander Blanx ever appeared in. Hugo also fought Batman in his debut, and the Super Friends a few years ago.

Despero has fought J'Onn in at least 20 individual comics, a low and quick estimate. In terms of story arcs, that includes their chess match from the early '80s, their defining showdown in early '90s JLI, their two matches in the New 52, and that Identity Crisis tie-in story, all of which were actual grudge matches rather than Despero vs. JLA teams J'Onn happens to be serving on. In raw numbers, Despero is the archenemy.

Beyond that, Malefic has appeared in 21 comics, and every one of them was primarily as an Alien Atlas antagonist. The forces of Apokolips, including Darkseid & Kanto, have gone after J'Onn specifically about eight times. D'Kay D'Razz managed 7 original appearances as a foil, Cay'an was behind the scenes throughout the 2008 mini, Bette Noir's in 4 books, and Bel Juz turned up in about 3 comics. Gorilla Grodd & Vandal Savage have each gone one-on-one with J'Onn a few times. The two biggest historical foes are Mr. V with 11 Silver Age run-ins and Diabolu's Idol-Head couple of years worth of misadventures.

Five appearances is not that bad for silver age standards. I guess the 70s were pretty bad on J'Onn's villains. During the 60s Mr. V, Diabolu and Hugo kept a good score.

I find Hugo's appearance interesting. He looks like some 60s middle-aged lawyer with a big head. It is known that the character of Egghead was inspired by Barney Barrows, I wonder if Professor hugo was part of the inspiration as well.