History:
According to J'onn J'onzz's file on Martian criminals and the All-Martian Council, Vulkor was imprisoned on his home world for stealing the only working model of a super-weapon developed to defend the planet. Believed destroyed in the conflict leading to Vulkor's capture, the super-weapon was instead dismantled and hidden in various locations. Several of Vulkor's Martian underlings took refuge on Earth near Star City, and so hid several components in the area. Three of these underlings impersonated Earth criminals, going so far as to serve time in prison, until everything was ready to recover the super-weapon components.

Once the arch-criminal Vulkor escaped incarceration on Mars, he made contact with his henchmen. The trio of Star City Martians revealed themselves and fled prison, despite the efforts of Green Arrow and Speedy to reign them in. The same night, the trio stole a meteor that was being displayed at a museum, which had been found in a city park two years prior. They then made their way toward a strange orange capsule that had recently begun hovering over Star City. The trio awaited the orders of Vulkor, and placed the meteor into a large mechanical hand that reached down from the craft. A voice over a loudspeaker announced "Hear Vulkor! The great day we have awaited for so long is near!" Within Vulkor, garbed in a purple jumpsuit with a spherical helmet, shattered the meteor to reveal a component of the mechanism he was reconstructing.

Spotted by the Star City harbor patrol, Vulkor crushed their boat with his craft's arm. The patrol managed to alert Green Arrow and Speedy, who had called upon Martian Manhunter for additional assistance. J'onn J'onzz recognized the group as being a Martian gang, and endeavored to apprehend them. Joined by a fourth man on the ground and now all garbed in purple outfits, the quartet of Martians, though slight in stature, overwhelmed J'onn J'onzz. "There! ...Our Martian playmate can't take a strong dose of equal Martian muscle!" Vulkor himself piloted his craft against the Arrowplane, which he crushed. A second encounter had the archers pinning the Martians down with sonics, only to see Vulkor and his ship rescue them, capture Green Arrow, and fend off the Manhunter. Green Arrow was allowed to escape, so that he could later be mentally-controlled through a Brainwave Energizer to attack the Manhunter from Mars.

Vulkor built his super-weapon and intended to test it on the atomic-powered ocean liner the Neptune, but was detected through a radio transmitter arrow fired by Speedy. The Martian Manhunter, disguised as Green Arrow, disabled the capsule craft's forcefield and boarded. Vulkor was not up to the fight that followed, his craft and super-weapon were destroyed, and he joined his men in a prison within a volcano. 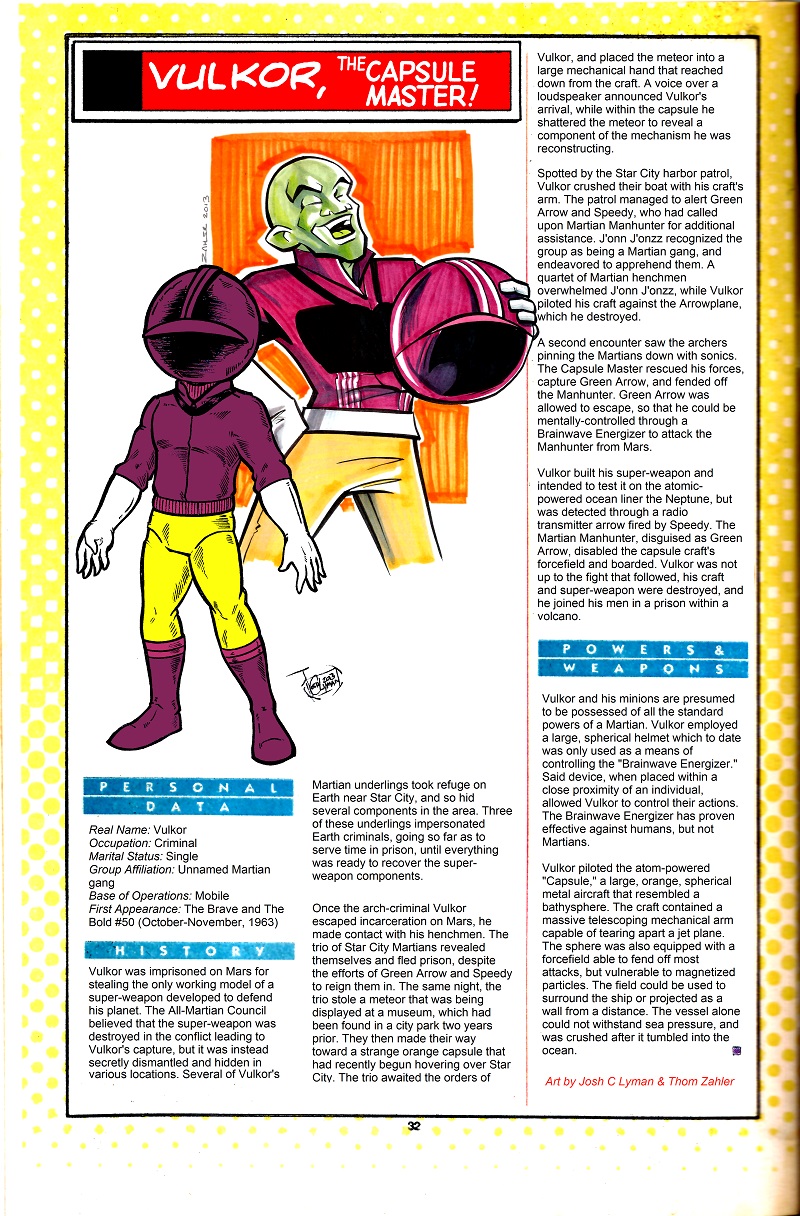 Powers:
Vulkor and his minions are presumed to be possessed of all the standard powers of a Martian. However, only super-strength and flight were demonstrated in their single appearance, although telepathy may have been employed in conjunction with the "Brainwave Energizer."

Weapons:
Vulkor employed a large, spherical helmet which to date was only used as a means of controlling the "Brainwave Energizer." Said device, when placed within a close proximity of an individual, allowed Vulkor to control their actions. The Brainwave Energizer has proven effective against human, but not Martians.

Vehicles:
Vulkor piloted the atom-powered "Capsule," a large, orange, spherical metal aircraft that resembled a bathysphere. The craft contained a massive, telescoping mechanical arm capable of tearing apart a jet plane. The sphere was also equipped with a forcefield able to fend off most attacks, but vulnerable to magnetized particles. The field could be used to surround the ship or projected as a wall from a distance. The vessel alone could not withstand sea pressure, and was crushed after it tumbled into the ocean.

Quote: "Eh--? I've pressed the control that makes him my puppet, but-- it's not working!"

Created by Bob Haney and George Roussos
Posted by Diabolu Frank at 7:00 PM