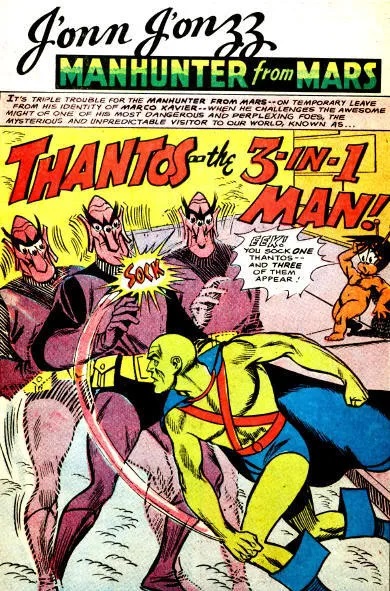 "It's triple trouble for the Manhunter from Mars-- on temporary leave from his identity of Marco Xavier-- when he challenges the awesome might of one of his most dangerous and perplexing foes, the mysterious and unpredictable visitor to our world, known as... Thantos-- the 3-In-1 Man!"

"Woodsville was always a quiet little town until that unforgettable day..." Thantos, a towering pink pinhead with three eyes and a unibrow, was something of a callback to the Idol-Head days. At the urging of gangsters he'd associated with, Thantos used his brain pan to drill his way inside a bank. Zook happened by, and melted the getaway car intended for Thantos' human cohorts to split with a hundred grand. No problem, as Thantos just picked them up and flew away. 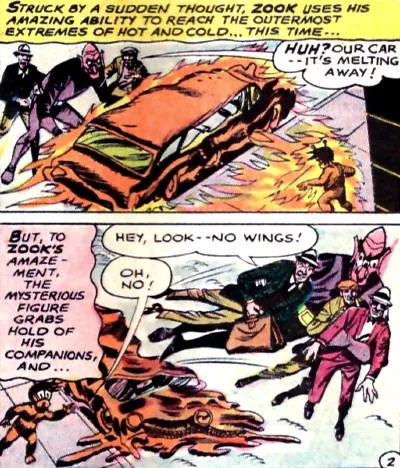 Vulture had been laying low, so when Marco Xavier heard about the unusual robbery via his short-wave radio, he decided to cross 3,000 miles of Atlantic to check it out. Or rather...
"O-o-o-o-o! If--if only Manhunter here--!" moaned Zook in his sealed mountain hideout. "He is here, Zook!" J'onn J'onzz announced as he passed immaterially through the wall. "Manhunter! You hear about alien crook, so you come?!"
"Right, Zook... And I figured you might like to join me in some real, live action--Just like old times!"
Ah, for the good old days... when dialogue like this didn't sound totally queer. 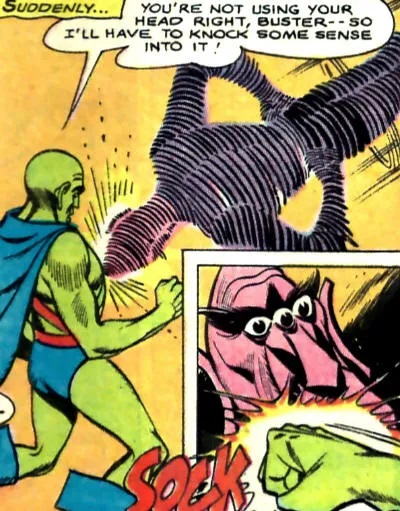 A radio bulletin announced a sighting in Midvale, so the extra-terrestrial twosome made off. "Looks like that bozo already did his dirty work-- in Midvale Museum!" Really? Those custodians won't even let me take pictures whenever I go. "He spotted you Manhunter-- and he not look very scared!" Thantos bored into Manhunter with his big head (and I'm not sayin' nothin'!) The Martian Miracle Man hit on Thantos, who suddenly split into three duplicates, and Zook let out such an "EEK!" The Alien Atlas determined, "I'll just have to take him-- one at a time!" The Secret Visitor from Mars leapt to embrace Thantos' #1, who went "POP!" on contact. The Master Earthbound Detective went for #2, who immediately popped in his hands. J'onn J'onzz frustratedly exclaimed, "This is getting monotonous!" Zook declared that the third Thantos had gotten away, but Manhunter reminded him, "Have you forgotten your ability to track bodily vibrations with those amazing antennae of yours?"

I'd like to take a moment to fan cast this scene for film: Tom Cruise as J'onn J'onzz, Anthony Edwards as Zook, and an airtight performance by Val Kilmer as Thantos, the "3-in-1 Man." Mee-ow. Or you know, Katie Holmes' hair has been pretty similar to Zook's lately. You be the judge... 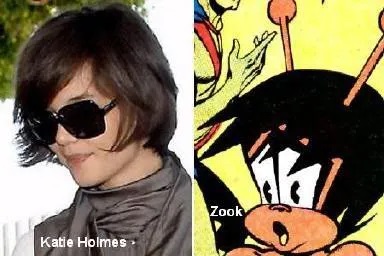 As another aside, what is it with Manhunter villains? Why can't they ever just shoot rays out of their eyes, or something? These guys have more powers than J'onn ever uses! As I've mentioned, Manhunter has to employ his intangibility to enter his sealed cave hideout. Why couldn't he ever use it in a case? Invisibility? A rarity. Elasticity? Ditto. I mean, you'd think J'onn was nothing but flight, masquerading, and Martian Muscles. If you've got it, flaunt it baby!

"What's wrong, Zook?"
"Not know, Manhunter! It not working for some reason! ...M-maybe his vibrations too different from human kind!" Don't judge Zook-- don't you dare judge Thantos' strange vibrations! Zook remembered that he could track the crooks who worked with Thantos, and guided the Sleuth from Outer Space to an isolated area. "Tense seconds later, Manhunter's acute Martian Hearing penetrates the shack..." J'onzz learned Thantos was stealing worldly goods for the crooks in exchange for other items he needed to locate in order to remain on Earth. "Hmm... so Thantos, whoever he is, doesn't have much time left! Well, from the sound of things, neither have I!" 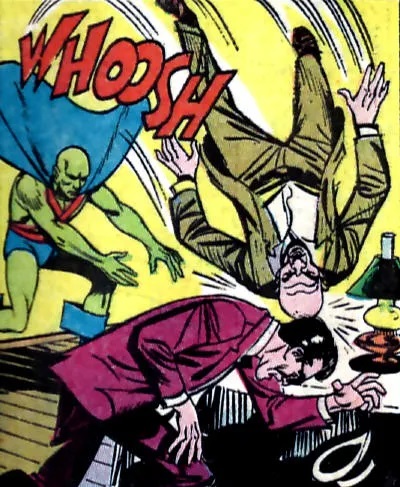 Manhunter burst in on the hoods, but one reached for a gas lamp to throw at him. To avoid having his weakness exploited, the Alien Atlas picked up a thug and tossed him head first at the noggin of the grabby gangster! Considering that real world physics sez that would break both their necks, J'onzz doesn't have to do much else to get the remaining goon to spill his guts. "And now, buddy-boy-- start talking!" Manhunter learned that Thantos only had twelve hours left to collect the items he needed to come and go from Earth at will. "Right... Zook-- let's tie these hoodlums up and hide the loot! We can turn them in after we take care of Thantos!"

"But where we start looking, Manhunter?"

"Fortunately, there are only two other museums in this area that contain what he's looking for... the one in Centerville-- and the other in Fairlawn! And since time is precious, Zook-- we'll split up!" Zook reminded Manhunter not to strike Thantos, or there would be three where one once stood. I grew up in the barrio, and the same thing was true there. Say, isn't "Thantos" just "Santos" with a lisp? Is this all gay subtext, or a meta-commentary on illegal immigration? All these "Thantos" keep hopping back and forth over the border, pillaging our wealth and culture! The U.S., a nation of immigrants, trying to keep "Thantos" out of a land we know isn't truly ours to begin with. Scipio is right, Jack Miller really was a brilliant author disguised as a hack! 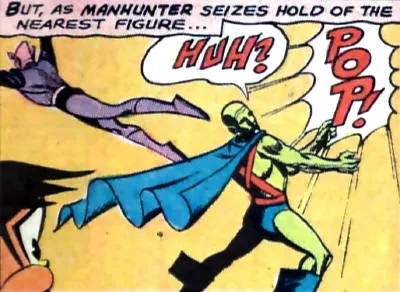 J'onn confronted Thantos at the Fairlawn Museum... "Put that stuff back, Thantos!"
"Make me!"

No wait, Miller was a total hack. Then again, J'onn rushed to embrace Thantos, his verdant lime face nuzzled against Thantos' yielding belly. Their legs interlaced, Thantos smiled and gave a thumbs-up to unseen voyeurs to their unspoken desire through the fourth wall. "Ha, ha! You fear to exert too much force-- for fear you will make me separate into 3 again-- enabling my other 2 selves to fetch what I'm after!" Oh, there'll be some fetching all right, and possible felching as well! In J'onn J'onzz's innermost thoughts, "I won't admit it... but he's right! Great Stars! He gave me the slip by turning tiny!" Oh J'onn, it wasn't you, it was him. It happens to everyone at some point. Don't make a big deal out of it. 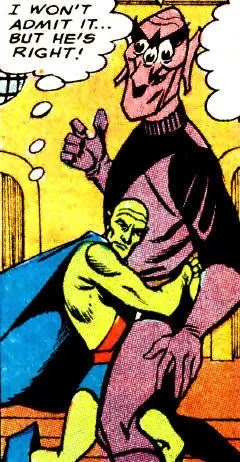 Thantos had revealed what a tiny little man he could become, and slipped out of the Manhunter's grasp. The Martian Marvel wouldn't let him go just like that-- he chased after tiny Thantos, and held him in both hands. Thantos declared, "You move very fast!" It's true-- heart first, head much too late.

"Just then, a familiar voice rings out... Manhunter! I-I just see Thantos in Centerville Museum!"
"You wha-at??"
"Y-yes! I--I guess Thantos separate first-- sending other selves to different museums before we even catch up to him!"

Not that I don't admire Zook's deductive reasoning, and maybe I'm just reflecting a Post-9/11 mentality, but the "other-dimensional pet's" broken English suddenly seems a bit... ethnic. Short guy, dark hair, bronze skin, always naked... he's a little cabana boy, isn't he? Jack Miller just raped my childhood. Or some Silver Age guy's childhood. I'm not nearly old enough to have read these things before I had a disposable income of my own. 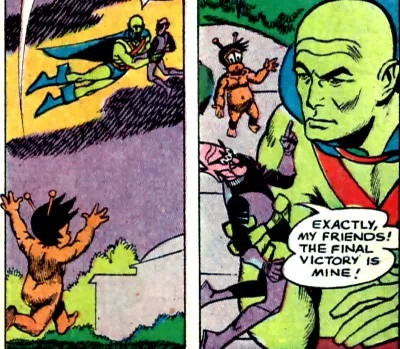 "Exactly, my friends! The final victory is mine! You see-- with my other selves joining me, I will now possess in the combined pouches all of the ingredients which, when properly mixed, will enable me to visit your world at will! My time has elapsed.. but I will brew the mixture in my own world! See you very soon!" You see what immigrant amnesty gets you? Drug runners with green cards! At least according to Jack Miller!

Once the Thantos vanish ("la Migra Marciano!") J'onn confided in Zook that he had swiped the Fairlawn Thantos' pouch when he first wrestled him. Without the final ingredient, Thantos wouldn't be coming back. "Manhunter--You a living wonder!" And you, Zook, are a brown-noser-- but we love you anyway. Just not like that.
Posted by Diabolu Frank at 7:40 PM