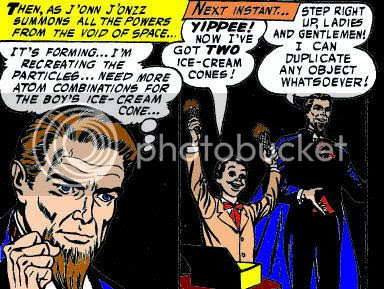 For those of you interested in this sort of thing, we're covering the fourth straight story in which no Martians are depicted. That streak's gotta break, but for now, this one's strange enough on it's own.

Mr. Daro's circus had been victimized by one theft after another, from payroll to box office to the diamond-studded collar off a lion's neck (both cat and collar a fresh gift from an Indian maharaja.) Private detectives were hired, but failed to uncover the culprit, assuring only that it was an inside job. After Captain Harding and Det. Jones heard all the evidence, John asserted that the only way to flush out the thief was to go "UNDERCOVER, Mr Daro! I used to be a fairly good amateur magician... Supposing you hired me as a performer?" Perhaps realizing after having referred to himself as "J'on J'onzz" that he might not be keeping it real, the stage name of "J'ONZZ THE GREAT" was chosen. You might consider that a bit self-aggrandizing, but remember, "By mere concentration, my powers enable me to grow a goatee in an instant!" That's pretty dang great, isn't it? If that doesn't do it for you, how about when he mentally lifted Togo the pachyderm? "My thought waves are bombarding the animal's body molecules! He'll be weightless in a moment..." I don't even understand what any of that means, but I know in my heart it's greatness personified. That's levitation, Holmes! The power... to move you.

Alternately, J'onzz the Magician sat in a box while real swords were stuck through said box. "By willing myself translucent, I cause the blades to pass through my bodyless form without causing harm!" That word... translucent... I don't think it means what you think it means. Also, walking a "tightrope" of common household thread? Don't the acrobats have a guild or something to prevent that kind of thing? This is a comic book. Unless the artist is given an entire page to draw a foot with one thin line under it, a line's a line, and I'd just be griping about that stupid page with the foot all over it, anyway. This is only a six page strip, and this is page five, so there wouldn't be any room for that sort of... wait a minute! J'onzz has been doing magic tricks the entire time he's supposed to be fighting crime on his adoptive homeworld! What is this? Come on!

Needing to up the stakes for the last page and a half, J'onzz came up with the trick of duplicating anything placed in a special box out of thin air... starting with an ice cream cone. How, you ask? By seeing through the box with x-ray vision, then summoning "all the powers from the void of space." Mind Cream! "It's forming... I'm recreating the particles... Need more atom combinations for the boy's ice-cream cone..." Presto! "Yippee! Now I've got two ice-cream cones!" Uh, kid-- don't eat that. It was literally made from the sweat off his brow, the spit in his eye and the gravel in his gut. Worse, it tastes like Cinnamon Pistachio churned with Skrull cow milk.

Various items from the audience; pipes, mink stoles; were replicated. J'onzz counted rightly on the greed of the thief to attempt the duplication of that diamond-studded collar. Not that he couldn't have totally done it, but it's the principle of the thing. I kid you not, Jojo the Clown was the culprit, and he even made a break for the juggler's torches he'd seen J'onzz the Great flinch at earlier. But see, he did so in the last three panels, with one devoted to exposition. For once, J'onzz just blew the blasted torches out with Martian lungpower. Truly, truly great.

"The World's Greatest Magician" was written by Jack Miller and drawn by Joe Certa. Garish “pop art” coloring by Frank Lee Delano, without any reference. Original colored art can be found here.
Posted by Diabolu Frank at 7:15 PM

A power I saw the Martian Manhunter use once and only once was elemental transmutation. In The Flash #175, he used "martian science" to turn gold kryptonite into lead. Any other example of this power?

In Justice League of America #3, J’onn J’onzz went in search of his favorite mineral, lodestone, while on an alien world. None existed on Mosteel, but this being the DC Silver Age, he just created some via “Martian knowledge of transmutation,” whipping up enough from base elements to craft a thirty foot harpoon.

Now if I had my choice of superpowers, being able to duplicate ice cream would be a good one. :P

I'd take shape-shifting to cover my gut after buying all the ice cream I ever wanted...