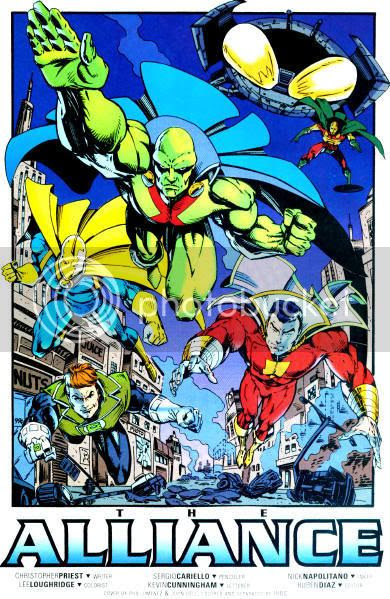 That was the basic premise of DC's 1996 Annual event, "Legends of the Dead Earth." I personally wasn't much taken with the dystopic far-future tales, and don't recall their selling terribly well either, but that might be because of the popular misconception that these were just myopic "Elseworlds." Truth is, a number of these stories tied directly into continuity, including this tale, though Legion of Super-Heroes fans know full well there is no "future" that is absolute in comic books.

Anyhow, Captain Atom appeared out of nowhere in the midst of a battle between the 1987 Justice League and a rebel group manning robotic walkers through a cityscape. While Blue Beetle and Black Canary piloted the Bug, Martian Manhunter, Dr. Fate, Captain Marvel, Mr. Miracle and Green Lantern Guy Gardner faced a direct assault. Captain Atom recovered to see J'onn J'onzz tear apart a walker with his hands while blasting a rebel with Martian Vision. When the Bug took a hit, Captain Atom rescued its pilots from a lethal attack. He next moved on to help Booster Gold, who took umbrage and blasted Captain Atom from behind. This was not any Booster Gold we know, but a coldly calculating field commander in a redesigned costume answering to "Michael Jon Carter."

A nearly-naked woman with African features calling herself "Maxima" swooped in to spirit Captain Atom away, leaving everyone with questions. His last memory of absorbing too much energy and making a quantum leap had left Captain Atom disoriented, but as this world flashed under his feet, he realized he was nowhere near Earth. Meanwhile, Maxwell Lord IV had survived from our time to this one in the robotic shell of Lord Havok. When Michael and Guy Gardner expressed dissatisfaction with Lord's leadership, Havok choked the Green Lantern to death. "Martian Manhunter" and the others looked on as "Guy" claimed he was only what Lord Havok had made him to be. "Yes, I see that-- and that's probably my mistake. You see-- I never did like Guy Gardner."

In hiding, Maxima (who seemed to have most of the powers of her contemporary version,) sensed Captain Atom in the quantum field and pulled him to her time. She and her "traitorous" lover Blue Beetle showed Atom an image of a Martian Manhunter skewering a rebel on a shard of debris. Maxima explained, "This is simply the way things are here-- on War World... this is a space ship containing an artificial environment. Lord Havok travels the cosmos in search of human life-- only to conquer and enslave that life, adding the survivors to his menagerie. My homeworld was ravaged by Havok. He broke up our moon to fuel War World's warp engines. The disruption of our gravitational field tore the planet apart. A handful of us escaped in lifeboats-- only to die at the hands of the Alliance. It pleases Havok that a state of war should perpetually exist here. Constant conflict between split factions-- the Natives-- descendants of races captured over the generations-- and the Trogs-- a catchall slur for those of us not born here-- those of us assimilated through Havok's imperialism."

"Ted Kord" continued, "Havok recruits young natives-- humans born here on War World-- and uses bio-telemic capsules designed to break down living organisms to the single atom-- in favor of whatever matrix Havok prefers. How you look-- sound-- powers-- personality-- even your memories can be reprogrammed." It was people like these, made to look like Martian Manhunter and Dr. Fate, who found the rebel base and began slaughtering those within. Captain Atom was distracted by Maxima's seductive charms, as she felt the need to conceive a child with the temporally-displaced hero who's combined power might succeed should they fail. Exiting her room in post-coital guilt, Atom never saw Martian Manhunter coming. "Hello, Captain. I've been waiting for you."

Nathaniel Adam woke up to learn his fellows were all but finished, and that of the Alliance, only Michael Jon Carter was the real deal. "Over the years I kept replacing organic parts-- like my arm-- with bio-mechanical prosthesis. Eventually becoming more man than machine. Living on and on through the ages-- through the death of our planet. Until Max found me adrift in the void-- and gave me a reason to go on living." The former Booster Gold also claimed Captain Atom was just another copy, made from a stolen bio-telemic capsule and given false memories, to provide Maxima with a child. Captain Atom refused this "truth," as he used his overwhelming power to fold the ersatz Justice League "like a cheap suit." The penitent "Blue Beetle" rewired a teleport network employed by Lord Havok, disintegrating him. Captain Atom hammered at the former Booter Gold with fist, lasers, and words. Atom ridiculed Carter as a "chronically self-absorbed screwup," who was faced with his own hypocrisy when confronted by a real hero.

"A little piece of yesterday, Booster-- reflecting the man you used to be. Which may be overstating the case. I never thought you were much of a hero anyway... It was always about you. Looking out for number one. And now that nobody's looking-- you just stopped faking it." Defeated, Carter tried to trigger the same teleport network as Lord Havok to similar results. While new life grew inside Maxima, Captain Atom continued to seek a way out of this time back to his own. So much for all that big talk earlier, eh?

The story by Christopher Priest was better than average, but lost weight to the hyper-stylized, Kubert-inspired art of Sergio Cariello and Nick Napolitano. Still, could have been worse, as a number of other "Dead Earths" had pretty lifeless art as well.

One final note: the bio-telemic capsules had an icon for each hero it reproduced, with Martian Manhunter's being a big, boring "X." Even Black Canary's, the diamond-eyed mask worn by her mother in the Golden Age, was better.
Posted by Diabolu Frank at 7:00 PM