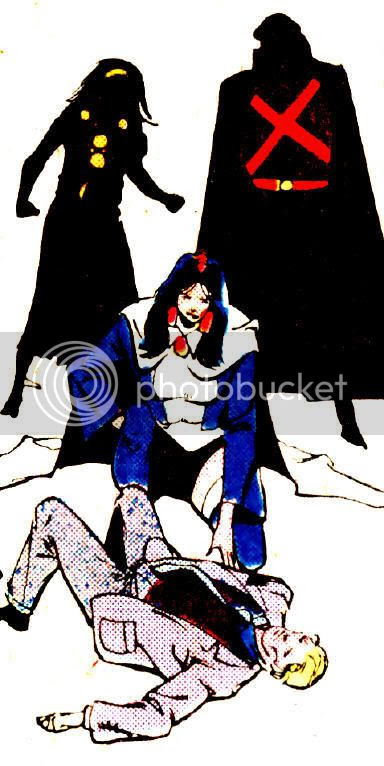 Martian Manhunter: Tried to keep Pamela Cross and Adam calm-- one so as not to distract his concentration, the other to stabilize ever-shifting reality that threatened to shatter Pam's mind. "Calm yourself, Pamela. You're beginning to sound... hysterical. Forgive me. That was unnecessarily cold." Dismayed by Gypsy and Zatanna's troubles in Adam's psyche. Detected the presence of Zatanna's father Zatara with her in Adam's being, but continued to declare that "patently im-- possible...?" After demanding the returned Gypsy maintain a constant illusion, she snapped, "Y'know-- sometimes you can be the most hard-hearted--"

"I know. Now concentrate. Please. Don't do it for me, Gypsy. Don't do it for yourself. Do it for Pam. For Zatanna. For Adam." The situation came to its resolution, prompting Manhunter to bemoan, "Being neither a romantic nor a spiritualist-- I remain skeptical. And I remain worried."

Once Manhunter sensed Zee had reached the Godhead, he commanded her to fight, but she would not. He was furious when Zatanna returned to the physical plane. "Damn you woman-- I hope you're happy... Look at Adam... at what you've done... For all intents and purposes-- he no longer exists. Answer me, now-- and honestly, is there some way to reverse this? ...Did Adam hurt you that badly? Are you that hungry for revenge?"

Gypsy: "Dragged down by the demons of [Adam's] subconscious. Devoured by the demons within!" Remembered by Zee once she'd liberated herself. "How simple... to chant an incantation and bring Gypsy to me. But no magic I know can restore her to life! No magic I know can repair the spiritual damage this encounter may have caused her! Why? Why did I insist that she come with me? Was it really because I needed her? Or was it because Gypsy insisted that we help Adam-- despite all the evil he's done-- despite the hell he put me through! Maybe I wanted to put Gypsy's idealism to the test. Well, the test is over now, Zatanna. Are you happy with the results?" Gypsy came around, heard Zee say she was sorry, and was returned to the material plane. Grossed out Pam by being covered in "residual psychic sediment," which dissolved eventually. When Gypsy wondered why Zee was sorry, Manhunter said "I have my suspicions, but it isn't my place to say." Asked J'Onn if he could send her back in. "Even if I could-- I would not... Now please don't distract me, Gypsy." Commanded by Manhunter to cast an illusion of normalcy in Pamela's mind as Adam's condition and Pam's hysterics worsened. When Zatanna returned and Adam lay broken on the floor, Gypsy chastised J'Onn for speaking harshly to the sorceress.

Zatanna: Drug herself out of the morass of Adam's subconscious. "And then, a cold panic spreads out from her chest as she remembers something... someone." Pulled Gypsy loose, as well, and sent her packing. Met her ideal man realized, not dissimilar from Adam's appearance. "He is her desire made flesh. And she wants him." Started making out, until her father's voiced admonished her and made her see Adam's bestial lust given form. More seductive entities entice Zee, but her father's voice compels, "You are my daughter-- you know what to do." Cover her face in a spell of "heartless stone," it seemed. Zee overcame additional challenges until she reached the Godhead, where at her father's suggestion, she gave in rather than fight. The Godhead destroyed Adam's ego, swallowed Zee, and spit her back into reality.

Adam: When Zee fell willingly into the Godhead, "I saw everything... that ever was or will be. And I saw my father. I saw The Father. I saw the plan. I know now. And so does he." Adam saw that everything, even his prior evil, was meant to be in the greater scheme of creation. "The Godhead wanted us, Gypsy. Adam and I have a destiny together. The Godhead did what it had to-- to bring that destiny about." Pamela Cross had suffered a nervous breakdown, but Zee fixed her mind. Adam assured "The full memory will return when her mind is prepared to handle it." Manhunter deadpanned, "How kind of you to allow it." Zee and Adam then disappeared to parts unknown. "I don't like this," said Martian Manhunter. Gypsy replied, "You're always being so negative! Couldn't you feel the love pouring out of them? The joy?"
"No."

Steel: "One pizza and two hours later-- at Justice League Headquarters..." Hank had been apprised of these recent events by J'Onn and Gypsy.

Elongated Man: Couldn't understand why Manhunter was so upset while retelling the tale. "Sounds like Zee and Adam came out of that mess in pretty good shape."

Vibe: Called Ralph a "real jerk," thinking Zee might be under mind control. "Y'know-- like a... cosmic moonie!"

Firestorm: Stumbled into the meeting with a warning: "You'd better keep worrying! But not about Zatanna! About the safety of the world-- and a lunatic called... Brimstone!"

The Creators: Those annoying caption boxes encompassing Zatanna and her father's thoughts are back, leading one to suspect DeMatteis may have scripted an earlier issue under a pseudonym. Whether intentional or not, this story allowed Zatanna sideways entry into the "End of the JLofA" arc, as her departure (and Batman's, in the midst of it all) marked the steady dissolution for the team. My understanding is that the dangling Zatanna story was picked up in the 80's Doug Moench Spectre series. It seems the Godhead was a hoax and Adam was killed off, but at least Zatara was finally laid to rest. I've never read the issues in question, myself.

Most Embarrassing Vibe Quote of the Issue: "'Authentic mystical experience'? Yeah. I had one o' those once-- when I stuck my finger in an electrical socket!"
Posted by Diabolu Frank at 7:00 PM