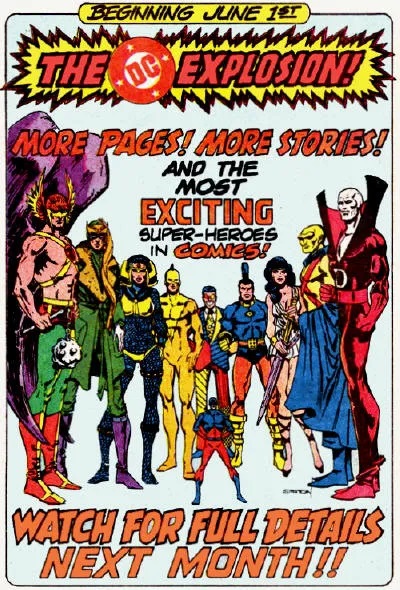 Between 1975 and 1978, DC Comics chose to fight against Marvel Comics' market dominance and rampant inflation by offering more titles with greater page counts than any other publisher around. This was a great time to be a new creation or well-regarded b-lister, as series were being handed out like Halloween candy during the "DC Explosion." Aquaman had spent years as a back-up in Adventure Comics before finally graduating to cover featured star status in 1975. Now he was offering his old back-up space, so Adventure hosted shorts for a few members of the Seven Soldiers of Victory before settling on three issue trials for a potential permanent feature. The Creeper followed up his brief stint in Detective Comics there with such a run, then hopped on board World's Finest Comics for about half a year in '78 and The Flash in '83. J'onn J'onzz should have been so lucky. The Manhunter from Mars followed Aquaman for three issues in Adventure, and both performed well enough to consider revisiting the pairing. Aquaman himself left Adventure to pick up the numbering of his old solo title right where he had left off at its 1971 cancellation. After some book-length adventures and a few Aquafamily spotlights, Aquaman was set to offer J'onn J'onzz a regular back-up slot. That was, until what became known as the "DC Implosion," which saw the DC house of cards collapse in a bloodbath of failed titles. Superboy and Aqualad had taken over Adventure Comics, until luckless Garth was booted for Eclipso less than a year in. Superboy soon suffered the same fate, though he had other books to fall back on. Adventure then became an extra-sized dollar comic anthology to which Aquaman returned late in '78 for a series of short stints until the book's cancellation in 1983. Like Superboy, Aquaman always had another title to shelter him, this being World's Finest Comics. J'onn J'onzz? Not so much. Unlike the characters the Martian Manhunter shared space with above, J'onzz had no actual pages of material in production when the ax fell. Guys like OMAC saw their produced pages burned up as back-ups in surviving titles before fading into obscurity. Others, like J'onn's Detroit League acquaintences the Vixen and Steel, only saw print through a 35 copy run of xeroxed art pages dubbed the Cancelled Comics Cavalcade, created only to secure DC's copyright on the material. Martian Manhunter was refused even that small grace, and didn't make a substantial appearance again until some guest spots in 1980. You can read more about the DC Explosion through a great article at Dial B For Blog.
Posted by Diabolu Frank at 7:00 PM

Doug knows this better than I, but I believe the Hawks only stint during the Explosion was their 3 issue run in Showcase, with their backups in Tec and World's Finest coming after the Implosion.

That article on Dial B For Blog is one of the greatest resources online as far as I am concerned. Plus it got me into Tor AND Beowulf!

Why did DC have such problems coloring Manhunter?!?

Rob, I doubt DC bothered with a Martian Manhunter style guide until the 1980s, and even then someone would have to bother referencing it. I also have to take some blame as things like skin tone relate to this blog, since jacking with the contrast and such turns J'onn yellowish half the time.

Luke, it's true that the '70s weren't kind to Hawkman, but at least he had JLofA to fall back on. Heck, he even got to ride along for half of Manhunter's "solo" story.

Also, Bob Rozakis had a good Implosion article at his blog worth checking out.