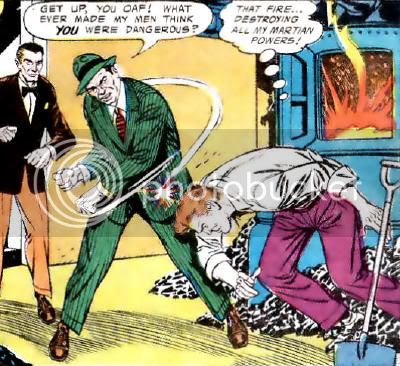 An off-duty Detective John Jones happened to notice a severed burglar alarm cable as he walked past a jewelery store, and spied thieves inside through the walls with his "Amazing Martian Eyesight." However, he failed to notice the pair of goons sneaking up behind him, and was knocked unconscious. At the dawn of the new morning, Jones awoke inside "some sort of underworld prison... a gang of thugs operating a jail for rival gangsters!" Jones was locked up, and the warden dictated, "Treat him like the other prisoners who've tried to double-cross us! He stuck his nose where it didn't belong!" Jones at first thought to use his alien aptitude to quash this nefarious (and rather impractical) undertaking, but his "Martian Ultra-Hearing" picked up a line regarding "the Chief." Jones wanted to net the kingpin of this operation, and chose to bide his time.

Intent on provoking a visit from "the Chief," Jones demanded roast turkey from the guard delivering gruel to his cell, "or I fetch it myself!" True to his word, he stepped through the walls and picked some up from a nearby restaurant, attracting the "warden's" attention. The Warden assumed a trustee was responsible for the unauthorized poultry, and sentenced Jones to laundry detail. Once there, Jones imbued the clothes with "Martian Mental Energy," excerpting "Mind Control Over Matter" to make the clothes wash themselves as swiftly as possible. Once again, a disbelieving guard called the warden down. "This bird must be using some sort of crazy hypnotism on us! Put him on the rock pile till I can figure this out!"

Outside, in lieu of his sledge hammer, "powerful alien currents swirl through the ace detective's brain," causing rocks to spontaneously combust! "Again and again the potent force penetrates the boulders," and then, "a vacuum created by a wind bouncing off that wall should load these pulverized boulders nicely..." allowing "Super-Lung Power" to finish the work.

By this point, the Warden figured Jones for a magician, and sent him to stoke coal in the boiler room until he could get the Chief on site. Jones was happy about this development, until the "Master Earthbound Detective" found himself near power-disabling open flames. The guard threatened, "I don't know how you're tricking us... but bullets don't like jokes-- so keep shovelin' pal!" The guard remained until fire had sapped away all of John Jones' virility, and the Chief later discovered the clown lying prone on the floor. From this position, "every muscle of the Martian Man" strained to focus ocular "Martian Power" at a nearby water tower until it collapsed. A deluge of water doused the boiler room's flames. "Now I won't even need secret Martian stunts to trap this gang... steam and water are my pals!"

Jones clobbered the bad guys and called in the police. Captain Harding congratulated Jones, and assumed of the water tower supports, "looks like somebody took a blowtorch to it... lucky break..." Jones covered himself by suggesting another convict did the deed to "reveal this place and get himself out of stir!"

"The Sleuth Who Went to Jail" was written by Jack Miller and drawn by Joe Certa.
Posted by Diabolu Frank at 11:55 PM

Ah yes, the olden days, when in every story, Jack Miller, or whoever wrote these, would make up a whole batch of new powers for Det. Jones. I like how his "Martian mind over matter" makes the clothes iron and wash themselves.

The thing I love the most about these old comics is how J'onn and Superman and many other heroes always had these bizzare powers out of no where. Everything from "Martian Mental Energy," to wash clothes to Super Weaving.

Got to love it!

My problem is figuring out whether they count as new powers, or just colorful rephrasings of "Molecular Hypnosis," "Super-Sensitive Hearing" and so on.

A modern version of this tale would take 15 issues (including two fill-ins), an Annual, and essentially be Martian Manhunter meets Oz.

Tales like this really make me want those Showcase volumes.

You're obviously devoting more thought to MM's powers than Jack Miller did.