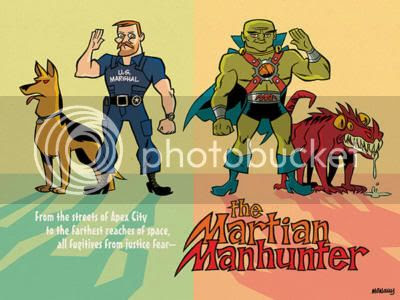 Project : Rooftop has always struck me as a good idea shepherded by the wrong people. If you've been a comic book fan for any length of time, you've probably at some point tried your hand at "Superheroes, Redesigned" to your specifications. It makes perfect sense, like those special edition letter columns from the '70s, to find a venue to showcase these fan efforts. Unfortunately, from its inception in 2006, Project : Rooftop catered to hipsters too cool for form fitting spandex, and specialized in putting your favorite super-heroes in sneakers and hoodies, or overwhelming the costumes with over-emphasized translations of real world elements in the characters, or just mocking obscurities. Of course, in the interests of full disclosure, I went from mild distaste to a full-on axe to grind after their ReVampirella contest, but I'll stand by my opinion regardless. Beyond the once yearly cosplay contest and the occasional gem in the rough (spread far apart by the site's lax publishing schedule,) I couldn't even justify maintaining it in my bookmarks.

This explains why when folks started emailing me about All-Ages All-Stars: Jon McNally’s Martian Manhunter, I initially groaned. Still, it was nice to see a professionally presented reworking of the sort of B/C-list character the site often overlooks. Then I read the copy...

From the streets of Apex City to the farthest reaches of space, all fugitives from justice fear-- the Martian Manhunter.

Right off the bat, if my rant against Apex City over half a year after The Absorbascon shuttered its doors seemed random, it's because all that vitriol bubbled back up again when I saw this less than a month ago, and I decided to get it out before covering this. Otherwise, I would have been likely to take a cute, clever image and make it my punching bag.

My first issue with this thing is that yet again, a costume redesign amounted to making the John Carter of Mars influence more obvious. The actual character of J'Onn J'Onzz has very little in common with Tars Tarkas beyond his origin being a reversal of Carter's, and it would make more sense to move far from that reference point, but that's usually not the case. Next, there's the gauntlets/bracelets, which I've hated on at length elsewhere. From there, the presumed "John Jones" is once again a brown-haired white guy, this time unnervingly sporting a mustache and day old stubble. All of that, not my speed, but then we reach the point of anger...

John Jones has been demoted to a K-9 unit. No longer a plainclothes detective, the Sleuth Handler from Outer Space has failed to remember W.C. Fields' wizened advise "Never work with children or animals," and has been Blue Falcon'd (both metaphorically and euphemistically.) The post in followed by a batch of comments that can be summarized as "oooooo, doggie!" Everybody loves the dog, you see, and the Manhunter is just standing there in the background. Then you factor in where dogs have typically come into play in law enforcement-- detecting drugs and illegal immigrants (or you can go back further, like harassing uppity minorities, or siccing the hounds on runaway slaves) and that whole Caucasian copper thing takes on a whole new negative connotation. At least the ugly as sin orangish-red alien dog wasn't presented as Zook, or I'd really be irate (they dubbed him Red Rover, because of course they did.) It apes Krypto, to fuel the fire of haters who draw unfair comparisons to Superman, and he's even found in Z’onn Z’orr, which was destroyed over a decade back. So basically, you've got an amusing image that, when looked on critically, epitomizes my gripes about using Martian Manhunter as a vehicle rather than an established subject. Sorry if I was unkind, but everything about this rubbed me in the exact wrong way.

On the bright side, at least Project: Rooftop seems to have upped its regularity and broadened its focus. I appreciate this "All-Ages All-Stars" initiative as well, so maybe I'll have to reconsider my negative opinion of them.
Posted by Diabolu Frank at 11:58 PM

"The post in followed by a batch of comments that can be summarized as "oooooo, doggie!" Three guesses as to what my original comment was going to be before I read that line.

The guy did think out his strategy, though, so I gotta give him points for that, even if it's a bit off-base. (I definitely do not like the 'stache, but I find it interesting he chose to make him a U.S. Marshal--they're like manhunters, after all.) But as soon as I saw "Apex City," well...

But you knew I'd like the dog. I mean, I liked the Basset Hound he had way back in Detecitve Comics and I think it should've stayed around for more than one issue. Shapeshifting superhero dog, no, but a friendly non-powered dog for him to come home to at the end of the day? I would've liked to have seen what the original JLI writers could've done with Martian + dog. I mean, they wrote an entire issue about a stray cat vs. Guy Gardner and that was epic.

This version of MM doesn't seem any less heretical to me than the way DC has treated him for the last decade or so.

Sure, there's a risk that there'd be a movie version with Jim Belushin as J'onn J'onzz, but other than that, I'd rather see JJ with a cute dog partner than get stabbed to death by a bunch of bad guys.

Of course, its not either/or...

Liss, I really don't mind J'Onn having a faithful canine companion. I do think his joining a K-9 unit or whatever takes it too far, and I really hate the slobbering pointy shapeshifting beast. I would have been so much more receptive if the dog became Zook (and I mean Zook, not that monstrosity.)

Rob, I know I'm in the minority, but I really didn't mind Coneheadhunter. It was no worse than how he was written in the '70s, and in fact, most writers just scripted him as regular J'Onn on a pissy day. If you're referring to the Ostrander series though, high five! I don't think you've ever stated an opinion on that front, but for me, Ostrander = Erik Larsen Aquaman. I'd rather J'Onn get murdered than continue to be written than poorly.

I'm not entirely sure, I think he might be a U.S. Marshal and not in the K-9 unit, which is rather like a government bounty hunter. They have way more power than police, as they are a federal agency and can cross state lines, etc.

The slobbery beast is right out of John Carter, for sure. I wouldn't want to see Zook be a dog...that'd be too demeaning to him. He could just be himself. Maybe Zook should have a pet?

I'm not up on U.S. Marshals, so I'll take your word for it. J'Onn feels more like F.B.I. to me, though. He'd fit better with Fox Mulder than Samuel Gerard.

They're not that well-known. I only know about them becuase I was questioned by two Marshals once, becuase the guy next door has this irritating habit of harboring escaped criminals, and the latest one had crossed state lines. I could see J'onn hunting down fugitives. Or investigating weird stuff in the FBI, too. Or some combination of both.

I recently became a fan of the show Justified, so U.S. Marshals are pretty cool by me. The canine companion works for me as pure kids-like-dogs fare. Plus it ties into the Blue suited Manhunter (not) from Mars and just fits the kiddie fun.

I like the chest sympol and find it funny that it's similar to the recent redesign. I like the size a little better, and is it just me, or are there some "canals" on it? The bracelets would get vetoed pretty quick by me, but I hate them less than previous bracelets, especially because they're not a stupid artist error, but in fact an actual redesign.

Getting back to the dog, I like the alien design, as it is truly alien, but with enough touches to make him likeable, maybe even lovable. If you named him Zook (or not) and made him very intelligent (for a beast) I'd be first in line.

Summation: Truer to the Silver age take than we've seen in a long time. Love the font, too. This could be a great Batman Brave and the Bold spinoff.

P.S. I got so caught up in optimism I forgot to say that I agree with you on a lot of what you said. Along with the bracelets, by Exec producer muscles would be flexed to make the Marshal Latino. Story lines would always have to be mindful of the two sides of law enforcement. Again, ala Justified.