Which Martian Manhunter Villains does an average number of our readership have an interest in?

Returning once again to our analysis of the January I-HoD villains poll, we find the last large selection of choices that were popular with just shy of a quarter of Idol-Heads. Less than half as many selections broke the 25% barrier as we find here, each with seven votes or a 21% share.

A villain created by the merging of a bunch of Jemm: Son of Saturn foes into one being. Barrel: scraped.

Devon Mob
Generic gangsters who happened to be the first guys to get beaten up by John Jones in his detective career. We care why?

Doctor Samedi
A voodoo-themed bad guy who fought J'Onn and Fire during a flashback in 1999's Martian Manhunter #10. Instead of a filler art post some night, I should just take fifteen minutes to induct him into the Menagerie.

The Shaggy Man was a powerful Justice League of America threat in the 1970s. General Wade Eiling was a constant thorn in Captain Atom's side in the 1980s. The pair were combined into "The General" to battle the JLA in the 1990s. One thing they had in common was that neither had been much bothered by the Martian Manhunter, who wasn't really in their circles. For the most part the Alien Atlas hasn't even breathed the same air as this General. I was referring to a one-off adversary from Detective Comics #254, and there's no way that guy got enough votes to place here. Sorry for the confusion.

I've spent two years resenting Mike Miller as the loser plucked from obscurity to initiate the murder of J'Onn J'Onzz in Final Crisis, but the fact remains that Arnold Hugo never headlined his own six issue mini-series. Seeing as there are 156 images of the Human Flame at Comicvine and folks know his name, I need to just suck it up and show respect to the guy. However, now the ball is in Comicvine's court to set up a Professor Hugo page already!

Like "The General," except for the part where he shoved a flaming spear through J'Onn's chest at the behest of the Human Flame during Final Crisis. That'll get you noticed around here.

Malador
An elder mage I've had a half-finished VM entry sitting around of for ages. Debuted in House of Mystery #143, with a sideways reference afterward. 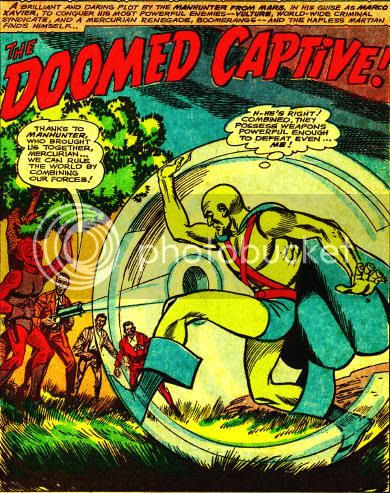 Visually somewhat a precursor to Despero, with only one appearance, I might ought to just knock out his VM entry already.

Nemesus
A sorcerer from 500 B.C. who battled Manhunter & Zook in Detective Comics #325.

I once had Ivo in the VM, but have since ejected him, as explained here.

The Swarm
A xenophilic plague J'Onn is fated to battle across multiple worlds per Martian Manhunter #1,000,000.

Tor, The Robot Criminal of Mars
From Detective Comics #243, and fairly self-explanatory, but in need of a VM entry. Goofy looking, but a "ditto" nonetheless.

Vulture
A global crime syndicate run by Mr. V that plagued Martian Manhunter during the latter half of his House of Mystery run. Neither an acronym nor a spy agency, alright?
Posted by Diabolu Frank at 9:00 PM

Thantos might look goofy, but J'onn hitting all three heads at the same time looks mighty cool. That just never gets old in my book.