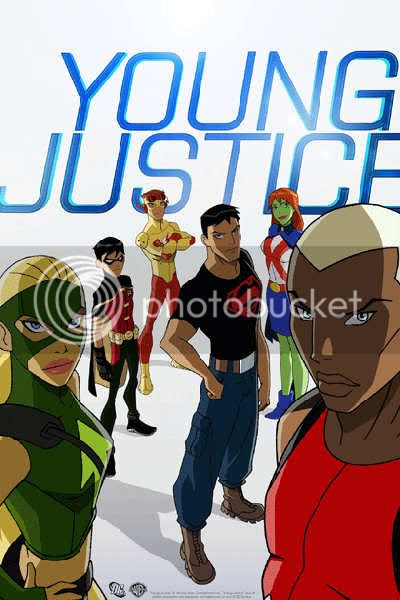 YOUNG JUSTICE is an all-new series produced by Warner Bros. Animation and based upon the characters from DC Comics. In YOUNG JUSTICE, being a teenager means proving yourself over and over – to peers, parents, teachers, mentors and, ultimately, to yourself. But what if you’re not just a normal teenager? What if you’re a teenage super hero? How much harder will it be to prove yourself in a world of super powers, super villains and super secrets? Are you ready to come of age in such a world? Are you ready for life or death rites of passage? Are you ready to join the ranks of the great heroes and prove you’re worthy of the Justice League? The members of Young Justice—Robin, Aqualad, Kid Flash, Superboy, Miss Martian and Artemis—are about to find out.
“There’s much more to come from DC Entertainment,” said Geoff Johns, DC Entertainment Chief Creative Officer. “This is just the beginning.”

Posted by Diabolu Frank at 7:02 PM

SUCH a good sign that they won't be throwing J'onn under another bus anytime soon. Plus, just cool looking. I've all the love in the world for Marv and George, but I don't feel "new" titans really were my thing. Consequently, an all sidekicks teen team is back to my speed.

Tim-Robin, Kid Flash and Superboy have never done anything for me, but I never felt much for Starfire, Raven, Cyborg or Beast Boy either. The new kids here intrigue me, though.

I figured the team was taking advantage of Green Arrow on Smallville, or bringing Speedy visually closer to her mentor. On further thought, with a name like Artemis, maybe she's really Wonder Girl's stand-in. Which of course begs the question, why no Wonder Girl, and power wise, is that why Miss Martian made the cut?

Yeah, Aqualad and Artemis have me scratching my head. Wonder where they are going with Garth. I hadn't thought of the Artemis/Wonder Girl connection. Interesting. I just went straight for the Speedy or Arrowette connection.

But hooray for Ms. Martian! She's only been around a few years and now she's in an animated series! Good for her!

Hmm. Interesting. I'll watch this show, of course, but I'm not sure if I'll like it. I'm not the biggest Titans fan, nor a fan of "teenagery" things.

I'm hoping it's Tim as Robin. Superboy's okay, so is Kid Flash. I have no idea who Artemis is, but the arrow pointing up on her outfit is a little too literal for me. I'm glad to see Miss Martian on the team, but I miss the flared pleated skirt. Maybe we'll get a few cameos from the grown-up Justice League. That would make me happy. Who knows where they're going with this, maybe the JLU will come back eventually. I'm guessing this is produced by Bruce Timm, which means I'm setting my expectations high.

Liss, this will be Timm-less.

"Sam Register ("Batman: The Brave and the Bold") is the executive producer with Greg Weisman ("The Spectacular Spider-Man") and Brandon Vietti ("The Batman") on board as producers. "

I seldom leave comments on blog, but I have been to this post which was recommend by my friend, lots of valuable details, thanks again.