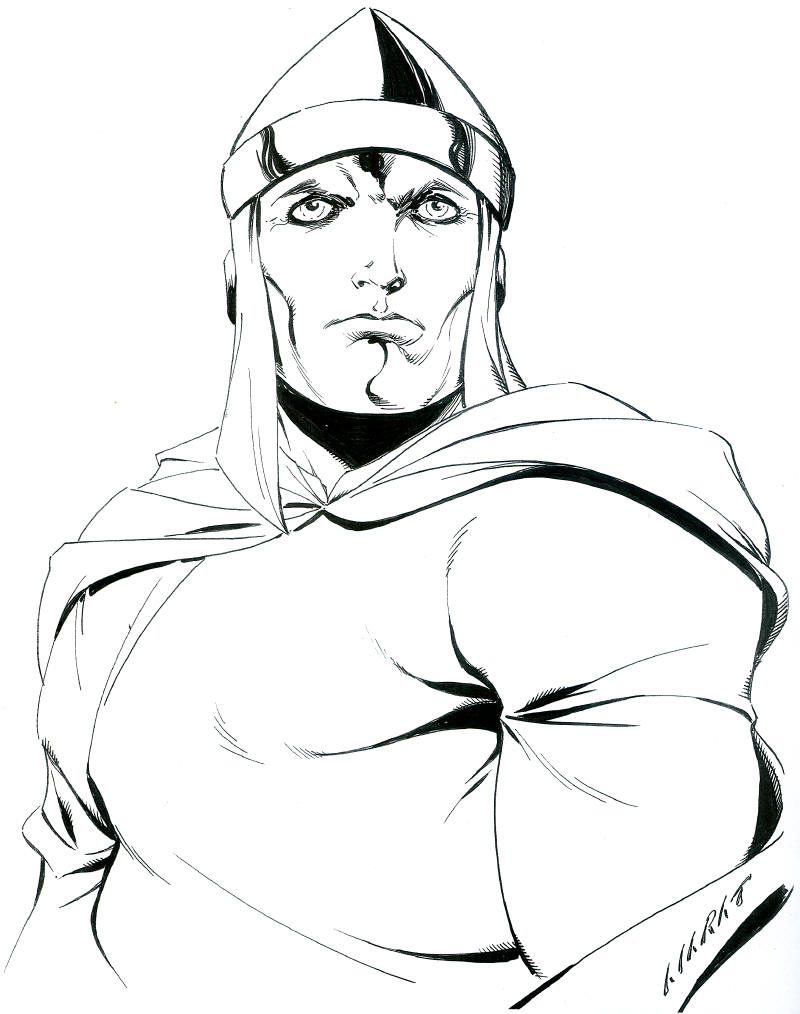 The one artist I felt sure I'd hit up for a piece at Comicpalooza 2010 was Rob Liefeld. I admit that I was a fan back in the day, in part because he was the only Image artist whose style I could replicate fairly well with my own feeble skills (shut up.) Like most people, I became disillusioned with Rob, but the novelty value of a Martian Manhunter head shot seemed totally worth it. However, Rob didn't show up until after two that afternoon, was constantly flanked by his entourage, and (though my friends said otherwise) I could never spot any quotes for his sketches. I'd heard some outrageous prices for his stuff while doing research online, but my friends said he was only asking $40, though his heads were said to fit easily within a trading card's dimensions.

Instead of Rob, I was torn between two of his protégés. One was at his own table, with his quote card partially obscured, and I hate getting too close to somebody's booth just to turn away. Another was amongst the group chatting with Rob, but I wasn't sure what Marat Mychaels looked like, so asking any one of the group was a crap shoot.

The day got late, I still had money burning a hole in my pocket, but remained indecisive. My interest still centered on the two Extreme Studios alumni, but I was afraid I'd waited too late to get work done that day, and had reservations about having any pieces mailed to me. Call it guilt by association, but a friend of Rob's was bound to elicit some trepidation. Finally, I sucked it up, spoke with one, and found him to be very cool. So much so, I passed him a c-note and my contact information, because that's one piece that would have to wait for another date. Cross your fingers, folks.

I then walked back over to the Liefeld table, took a shot at identifying Marat Mychaels, and totally failed. Mychaels was actually partially detached from the group, and the tall, lean, bald fella had to be called over to speak with me. Looking at his quotes, I chose to have a "bust" done for something like $40-60. I figure something closer to the former, because I believe he was the one of the two charging $75 for his full figures.

Anyway, let me tell you about Marat Mychaels. The guy got started doing uncredited assists on X-Force, then launched one of the first major Youngblood spin-offs, Brigade, which at the time was one of the worst comics I had read to that date. However, Mychaels was still a teenager at the time, and it was the writing that stunk up the place (see also: 8 of every 10 Image titles throughout the '90s.) I watched his style develop over the years though, and came to really enjoy his work, especially on Blindside. I had plenty of reference for Martian Manhunter related characters, but tried to tailor my sketch/commissions to each artist's strengths. I specifically thought Commander Blanx would be a great fit for Mychaels' style, and he was enthusiastic about the chance to draw such an unfamiliar character. He told me to come back in a half hour, as he planned to get right to work.

I headed back into the dealer room, on a schedule to kill an hour for another artist. My friends were tuckered out by that point, and sat together on a stage while I thumbed through nearby cheapie bins. Exactly on the hour, we walked back to artist alley. Rob and his studio were packing up their things, while my reference page sat on their table atop a full sized comic page. Marat Mychaels was helping out, but also keeping an eye out for my return, clearly having long finished and concerned about my making it back to collect his effort. I picked up my page, and was gobsmacked.

Commander Blanx is the nefarious political leader who engineered the genocide of the Martian people for his own personal gain. If Blanx were to have a picture of himself on his wall, and surely he would, this would be it. Noble, handsome, resolute-- this is how that maniac would obviously see and present himself. Yet, look at those eyes, just a bit too large and disproportionate to be quite heroic, following the rules of villainy set down by Mr. Glass in Unbreakable. My old friend/former customer Damon Owens used to like getting his commissions professionally colored, and this is the first time I've had a similar pang. It gives me an urge to recreate Blanx's den my own self.

Mychaels seemed pleasantly surprised with how the piece turned out, considering his lack of familiarity. I think that worked in his favor, as his turning Blanx's scullcap into a draping Persian-style helmet was a stroke of genius, showing the character in a new light. I was shocked by the size and level of detail. Filling up about 85% of an 11" x 17" official Image Comics art page, I couldn't fit the entire drawing on my scanner, and had to resize a copy at Kinko's (okay "FedEx Office.") It's a fantastic work, my favorite image of the character ever produced, and now more than ever I hope to see Mychaels get some more comic work out. Barring that, I've got some more commissions in mind...
Posted by Diabolu Frank at 9:00 PM

That's a great piece. I like the simple, no-nonsense art style. Very classic.

Do you know which comics Blanx has appeared in? Like how many and do you know which ones. I am interested in the character, i have known about him but havent read many about commander Blanx. Thanks

Pleasantly surprised to see such a clean, clear style from a former Liefeld ghost. And I had the same thought as soon as I saw it: this would be the rat bastard's official portrait, spooky eyes and all. If he had become dictator, this would be the picture on the Martian one-dollar-bill.

Spectacular!! It takes a really mature artist to give a character such personality while still staying true to the original. And that helmet was such a good idea. I envy that kind of originality of thought.

"If Blanx were to have a picture of himself on his wall, and surely he would, this would be it." It really does resemble a full-out posed portrait. Are you going to frame it?

Hey, if you can replicate any artist you've got something going for you.

Everybody: Running on fumes lately, and my first attempt to respond to everyone (yesterday morning) got eaten by a computer error.

Rob: I dig the concentration of detail where it counts. It's like there's a creeping, gnarly, barely concealed tumult amidst Blanx's facade of quiet dignity.

Anonymous: Click the link to my Commander Blanx Profile, and at the bottom of the post are links to his only two comic book appearances.

Tom: Blanx pretty much was dictator, or at least a highly influential/threatening global leader. Maybe somebody carved this image of him into Martian Mt. Rushmore before he burned the whole planet out.

Liss: I haven't drawn much in years, and my "ghosting" skills were pretty limited. I'd rather pay someone to do good work like this than drive myself mad trying to draw, and failing in soul-sickening fashion. I really do think I'll frame a color version of this someday, and probably ought to get this under glass beforehand.

I love your blog! I have a sketch of Martian Manhunter from the Justice League cartoon posted on my blog if you want to check it out.

Derf, you're a machine to knock out so many posts in so short a time! If you'd like, I can post your sketch here, along with a few links to relevant posts (like the DC Avatars.)