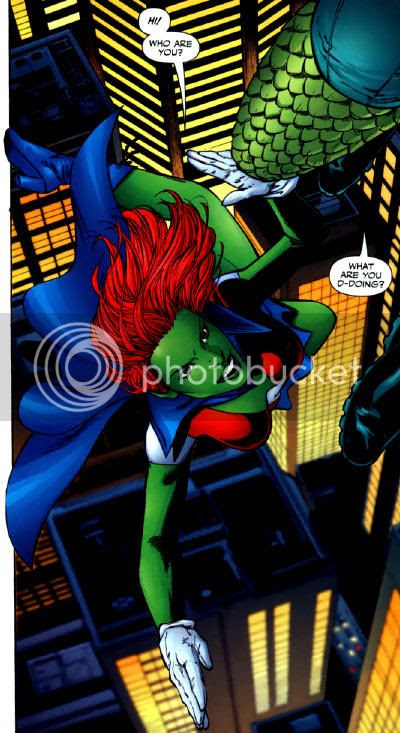 In Tokyo, the Titans met with The Amazing Zatara, world's greatest teen magician. Zatara is Zatanna's cousin, whose powers manifested after the Infinite Crisis tie-in Day of Vengeance.

Zachary proved egotistical, rude, and dismissive, wanting nothing to do with the team he felt embarrassed for ever having been a part of. Zatara answered a few questions regarding Raven, was particularly nasty to former cohort Kid Devil, and confirmed that his powers of materialization couldn't retrieve Raven. "I can't affect people. Just things." After the Titans left, Zachary conjured a picture of Raven, and seemed regretful. He leapt up, calling for Kid Devil "Eddie," to wait, but was too late. "...and the show goes on..." Eddie explained later that Zachary wasn't always like that, and had helped him get onto the Titans in the first place.

In Brisbane, Australia, a black villain garbed in a green scaled costume calling himself Gunshot held a woman hostage atop a tall building. His hostage managed to push Gunshot over the ledge, sending the villain soaring through the night sky. Laser Vision struck Gunshots excessive firearm, a disembodied voice chastising "You don't need that awful thing anymore." Gunshot then saw a smiling green-skinned girl with red hair waving at him. "Hi! Who are you?"
"What are you d-doing?"
"I'm flying. You're falling."
"CATCH ME!"
"First you have to make me a promise."
"WHAT?!"
"Do you promise not to be a bad guy anymore?"
"WHAT?!"
"I don't want you hurting any more Earth people. That wouldn't be nice."
"Help me!"
"Not until you prooom-ised. And you better mean it! Because if you break your promise... I know where you live, silly. I'm a telepath! Hee hee."
"Okay! Okay! I promise! I promiiiiiise!
"You're not crossing your fingers, are you?"
"No! LOOK!"
"Oh, good."

As the sidewalk rushed toward the pair, the alien finally slowed the villain's decent, grasping him by the ankle. "You would have made a terrible mess." From a nearby rooftop, Ravager explained, "That's M'Gann M'Orzz. She calls herself Miss Martian." As MM grinned and fried the electronics off Gunshot's body with Laser Vision while police looked on, Kid Devil continued. "Megan Morse was born on Mars, like the Martian Manhunter. When the White Martians started decimating the Green ones, her parents sent her in a rocket to the Vega System. After she heard there was another Green Martian who survived the White Martians' attack, she showed up on Earth. And she stayed."

Cyborg asked, "What did J'Onn say about her?" Kid Devil replied, "I don't know. I never met him." Kid Devil also explained that Ravager and Miss Martian had been roommates for a couple of days, but had a falling out when M'Gann thought recreating a pie gag from "Three Stooges" would make Rose laugh. Instead, Ravager went ballistic, calling her nasty names and making her cry. By this point, Miss Martian had realized the Titans were present, and said, that besides the Ravager incident, she had quit the team for "a lot of reasons."

M'Gann led the team to the Ianami Desert, where she confided "I stay here because it reminds me of home. Do you ever get homesick? I think maybe that's why Raven came to me. To talk about it." Wonder Girl wondered what Raven wanted from M'Gann. "She wanted me to use my telepathy on the Teen Titans. She was looking for something. A secret, she called it. But I told her, as I did before, Wonder Girl, I am forbidden to use my telepathy on good people. It's a rule I have." Ravager asked, "How about breaking the rules just this once?" M'Gann mournfully recalled, "I broke the rules when I allowed myself to become friends with you, Rose. I was warned about humans. They lie and cheat and betray. That's why I left the Titans. I was told the Titans were a group where young heroes went to meet friends. But they're not. All they did was argue." Robin didn't want to invade anyone's mind, but he begged Miss Martian to use her telepathy to help Raven. "I... I can't. All I'll hear is the bad things the Titans think about me. It hurts my feelings. None of you know what it's like."

M'Gann directed the Titans to Raven's next stop, meeting Bombshell on the U.S.S. Ranger in the South China Sea. This would be the brash military girl with powers similar to Captain Atom's, who confirmed that Raven had been looking for a traitor amongst the Titans, and that it was Ravager. Meanwhile, in the desert, Miss Martian decided to scan all the Titans minds in secret after all. As her features began to severely blanch, M'Gann revealed much. "Oh, my. I think I've found the bad guy." This was said while M'Orzz was in her true, natural form of a red-eyed White Martian...

"Titans Around The World: Part 2" by Geoff Johns, Tony Daniel and Kevin Conrad.
Posted by Diabolu Frank at 9:00 PM

Miss Martian sounds like she has a sense of humor and is quite fun. She's starting to grow on me a little bit.

I'm just a bit peeved by the fuzzy origin of just "showing up" one day, but oh well. And she reminds me of how I have mixed feelings I have about White Martians in general. Don't White Martians have a slightly different powerset from Greens, or am I imagining things?

Liss, for some reason, two of your old comments (involving Dr. Trap being too dark + cool bellbottoms and the modern potential of Bel Juz + the Marshal) came back up for re-approval on my moderation form. I dunno why.

Anyway, I was using HTML Comics for these Miss Martian entries, which seems to have bitten the dust. Luckily, I did enough advance write-ups to finish the arc, and I've got some fillers until I can hopefully access more issues at a local library. I scanned ahead a bit, and found Miss Martian does have something approximating an origin. Unfortunately, it's very Teen Titans, and indicates she has dissociative identity disorder. Hopefully, a mainstream Young Justice show will help clear that up, but the Teen Titans cartoon didn't keep Slade's comic persona upright, so probably not. I guess this means she's basically Matrix-Supergirl with a bit of bad Linda Danvers in the mix.

Aside from seeming to be more vulnerable to fire than their modern counterparts, I can't recall anything distinguishing the White Martian power set from any other. Miss Martian's youth would surely be a factor in a comparison, though.

Yeah, I just noticed that, too, since I subscribe to comments and both got e-mailed to me. *shrugs* I didn't do anything, so maybe Blogger is possessed??

"Unfortunately, it's very Teen Titans, and indicates she has dissociative identity disorder. " Aww. I hope this doesn't this mean she loses the cute lighthearted personality? Humph. "Fun" superheroines seem to be far and few between.

I thought for some reason White Martians weren't as good at shapeshifting. I think maybe that's alluded to in the "Others Among Us/Coneheader" mini, if I remember correctly.

Maybe this gets worked out down the line, but from what I saw, Miss Martian's got two personalities. There's the sweetheart, and there's the murderous witch, in a tug-of-war for dominance the cute one usually wins. It's kind of heroic, in a psycho sort of way.

I'll be getting back to reading Coneheadhunter soonish. I haven't decided whether or not to flash back to Infinite Crisis first. Thoughts?

Hey, if you can make sense of Infinite Crisis, I'd love to hear it, but J'onn didn't play a huge role in that if I remember correctly, and you don't need to read IC to understand the Coneheader series, so you could skip it and go right to Coneheader coverage. Personally, if you have the strength left, I would enjoy an official Ostrander series Airing of Grievances, hopefully before Festivus rolls around, especially since Tom just read it. Might get a little contentious though, and it just might trigger the evil murderous persona to come out...

Oh, and before you do write up the Coneheader series, head on over to Amazon and read the reader reviews for it. They are all glowingly positive, and struck a chord with some folks, I think maybe because they like the Batman-esque version of J'onn.

My consideration of IC is that I covered the last Manhunter JLA arc, "Crisis of Conscience," and then picked-up from "52." The gap bugs me some, but so does the thought of trying to simultaneously cover all of "52" across three blogs.

Y'know, Tom and you and I all have different tastes. There's room here for everyone, even when they're complete wrong in the head. I spent two years airing my grievances on the DC Message Board while the Ostrander series was being released, so there's no way I could adequately summarize my disdain without taking an issue-by-issue squat. I'm thinking I may try to cover three Martian Manhunter series in simultaneous sequence ('88 mini, Ostrander, Coneheadhunter,) but I've got finals in May and groundwork to lay first. Yeah, screw Infinite Crisis.

Anyway, a lot of people loved Ostrander, and some folks liked Coneheadhunter, but I've only read one of the two myself. It might be fun to represent as a DeMatteis fan in the face of that, and I'm genuinely curious how I'll react to that last mini.

Seeing a writeup of the '88 miniseries right before the Ostrander and Coneheader series will be interesting.

You can count me as a representative of Team DeMatteis. I'll tag team with you against Tom, Muahaha!...I mean...all are welcome...

Oh, I think I know how you'll react to that last mini.