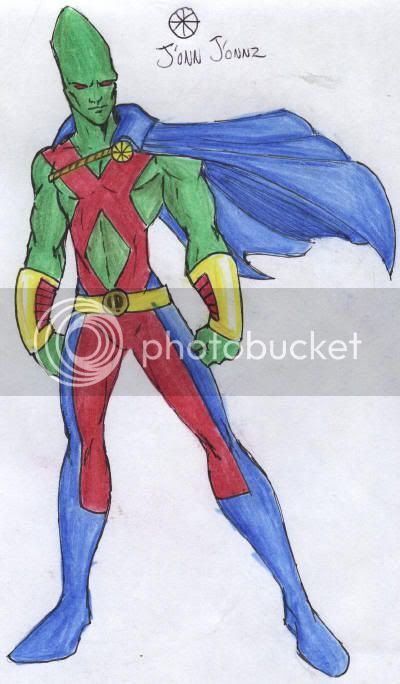 Here's another costume redesign from out of Melbourne, Victoria and on through to the 30th Century (1996 version.) There's an awfully familiar flavor of requested asymmetry here, as well as the always popular Liefeldian "Look at my crotch" mid-line stripe. I like the belly diamond because a) there's not enough dudes with exposed midriffs to balance the entrenched sexism in comics, b) it downplays the highly played out chest straps sported by every fifth DC hero, c) that conehead would totally fit into the navel gap like an autoerotic glove or an immature gunt and d) it reminds me of that nifty Alan Davis design, but without the entirely unnecessary segmented armored codpiece (save that for under Magnus' skirt!)

This isn't the kind of thing I'd want to see regular, because real Manhunters don't wear bracelets, but it's pretty spiffy for its stated employment qualification at a fictional Legion Academy. Plus, you always win points with me through a folded collar and a "pie" symbol. I'm easier than Lindsay Lohan at a film/record producer convention with Columbian Snow hors d'œuvres.

Jeez, can you tell I was reading Tucker Stone before writing this post? What a mouth I have!
Posted by Diabolu Frank at 12:00 AM

So THAT'S what's under Magnus's skirt? I've always wondered what was behind those very convenient shadows.

I like the pie symbol up on the cape off to the side, I must say. Asymmetry works for J'onn, I think, and why does Captain Marvel get to have all the fun in the half-cape department?

This totally works for J'onn fitting in with the LSH crew. Besides, if you're a shapeshifter, why wouldn't you try some thing new ever 1,000 years or so?