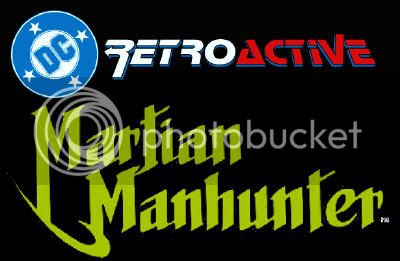 From DC's The Source Blog:

Two weeks ago, we announced all the artists who will be illustrating all the ‘70s books in this summer’s RETROACTIVE series. Today, we’re going to fast forward one decade and reveal what artists will be joining the creative teams of the previously announced writers behind the ‘80s books. We’ll also be giving you quick first looks at what these titles will be about. As we mentioned before, each of these new 26-page stories will be followed by a classic story from its era by the same writer.

Previously, J.M. DeMatteis wrote of the project, "The older I get the more I realize that the most important thing any of us can do in life is strive to live compassionately, keeping our hearts open, treating others with understanding and, most important, simple human kindness. “That which is most needed,” as Buddha said, in words that have echoed through my life for decades, “is a loving heart.” I truly believe that the microcosm is the macrocosm. That our smallest acts of compassion resonate across the planet. That one heart can quite literally change the world." "Of course it’s one thing to make compassion an intention in our lives and quite another to live it. J'Onn J'Onzz tries to be as good and decent a being as he can, but as a super hero and detective, he is constantly faced with the worst of our world. During my run with Keith Giffen on Justice League International, I tried to play with the conflict between J'Onn's consciously working on himself, on his connection to the Divine, and the realities of our world. No matter how hard we try to live our highest ideals, we are, at some point—and, I suspect, with some regularity—going to screw up. That happens without the need to routinely sock bad guys in the jaw. It was a complication and duality that I always wanted to explore further, but I never had the chance to work with the Martian Manhunter in detail after leaving DC in the early '90s. I also wanted to return to my character of Saul Erdel, and explain why he revealed the truth about J'Onn's past after so many years. This project struck me as the perfect opportunity to finally touch on those points."

Keep checking back to THE SOURCE today as we reveal details for all of the 1980’s books.

DC RETROACTIVE: MARTIAN MANHUNTER – THE ‘80s #1
The ‘80s were a decade that forever changed the Alien Atlas. Now to tell an exciting “lost tale” from that era will be the creative team of artist Luke McDonnell and acclaimed writer J.M. DeMatteis.
ONE-SHOT • On sale AUGUST 3 • 56 pg, FC, $4.99 US • RATED T

Posted by Diabolu Frank at 1:02 AM

I'm never believing anything you say ever again.

That being said, if Gerard Jones isn't in the 90's retroactive DC lineup, I'll be a little miffed.

Oh, and I never realized what jazzy hands Dr. Trap has.

Prepare to be miffed.

When this project was first announced, I looked at their writer line-up and brainstormed who the most logical, obvious choices for Martian Manhunter would be. I hated pretty much every Manhunter story Denny O'Neil did in the '70s, but absolutely no one else was qualified or believable on this project except for him. I probably stretched probability by including Michael Netzer, especially once the announced artists proved less than vintage. Regardless, he made sense, and would love the opportunity to work on such a book by his own admission.

For the '80s, the choices were limited to Gerry Conway, Keith Giffen, and DeMatteis.
I passed on Conway because the average reader wouldn't see the connection, and I've already done a bunch of fan fictions attributed to Conway. I probably should have gone with Giffen, since he's under represented here, but DeMatteis' influence was just too obvious and strong not to give him the nod. While DC hasn't shown a lot of fidelity to the original artists, I want to, so long retired Chuck Patton, indisposed Mark Badger and already preoccupied Kevin Maguire were passed up. Luke McDonnell proved gettable seven years after his last major assignment for a few panels in Justice League of America #0, so I figure he'd do this. Also, there was his brief stint with DeMatteis on JLofA, which makes for nice symmetry.

For the '90s, there was only one obvious, interested writer to use on this project. Gerard Jones hasn't written an American comic book since 1999, and aside from American Secrets, he never had much to do with the character beyond cameos. I couldn't see a modern DC editor reaching out to him for this, especially after his open disdain for the industry and a record of criticizing the company.

No Ed Barreto, either. I thought he quit drawing newspaper strips due to having gone legally blind, but he up and drew a Superman Retroactive special. Tom Mandrake got booked for a Batman one. I thought about Sal Velluto, but he's been mostly M.I.A. since 2005, and another leftish field option seemed a better fit...